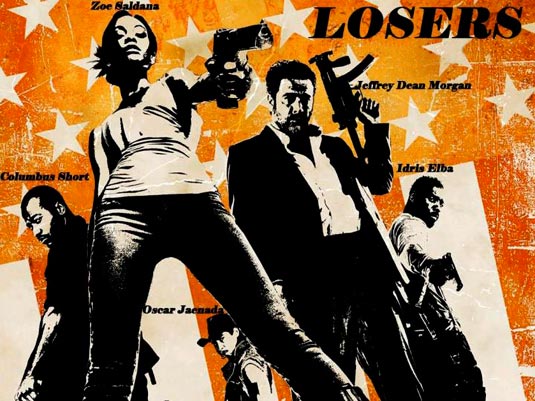 The Losers is a perfect example of the `turn your brain off at the door’ action film. It’s mindless in the extreme, but- as most action fans already know, that`s not necessarily a bad thing. For the most part, THE LOSERS, which is based on a DC graphic novel that I must admit I’m not familiar with, is a fun action ride…read more [Joblo] “The Losers” opens with some questionable boom-boom in which 25 school kids and a teddy bear are blown to bits in a drug bust that goes wrong. It’s a frame-up that leaves the Losers for dead. Actually, they’re just lying low, passing time betting on cockfights and working in a Bolivian sweatshop that makes dolls destined for American toy shelves. It’s a slooooow start as the boys wonder if they’ll ever make it back home. Instead of ruby slippers, which wouldn’t fit the mood as surreal as it is, they get Zoe Saldana’s Aisha, who turns up like a bad penny in a black hat. Finally, some real action and a ticket back home that includes payback for Max…read more [LA Times]

The Losers Wallpaper, Zoe Saldana Comic book based adaptations have started taking themselves a bit too seriously. Since Batman Begins everything seems to be trying to be dark and gritty. There is none of that in The Losers, a film intent on blowing things up and fulfilling the obligatory sex scene quota (of which I’m actually surprised to see most of it in the TV spots). I never watched director Sylvain White’s Stomp the Yard so I can’t tell you whether he’s grown as a filmmaker or otherwise, but I didn’t notice much of a signature style. Early on he tries a couple of cheap-looking freeze frames, attempting to mimic a comic book, and then he ventures into Zack Snyder slow-mo territory as flames climb the walls and Saldana looks to deliver a right cross. However, he appears to have set out to make more of an amusement park thrill ride rather than a heart-stopping thriller and he has. This film has an injection of fun films such as Hitman and Max Payne needed…read more [Rope Of Silicon]

Zoe Saldana and Oscar Jaenada in The Losers The Losers is the subgenre’s unsatisfying coda, essentially a run-of-the-thrill action flick with dashes of animation reminding viewers that, yes, this comes from a comic book, too. That’s just about the only way to tell. Without previous knowledge of Andy Diggle’s comics, The Losers looks like every other globetrotting gunpowder flick in which good guy bullets never miss and bad guy bullets never hit their targets. These Losers don’t have super powers, just very large guns, bombs and knives with no reluctance to use them. Nothing wrong with ballistic entertainment but the makers of The Losers gutted the blood sport appeal to obtain a more bankable PG-13 rating. Notice how director Sylvain White cuts away from bullets and shrapnel ripping through flesh and tamps down the sex and profanity. The Losers is sanitized for box office protection…read more [tampabay.com]

Jeffrey Dean Morgan as Clay and Idris Elba as Roque in The Losers The Losers is an interesting blend of Greed Decade swagger and post-millennial manipulation. The plot — borrowed from the four panel series work of Andy Diggle — balances character with flash, narrative twists with your typical firefights to attempt something both modern and as moldy as Jean-Claude Van Damme’s tank tops. It wants to be a cheeky, comic romp, relying less on CG splash and amped-up visuals and more on the dynamic between individuals to work. Truth be told, Morgan and company make a compelling team. Englishman Elba is a wonderful personification of his nickname, while Evans gets all the good lines as a geek goofball with a tendency toward tacky t-shirts and skirt chasing. Avatar’s Saldana more than holds her own with the rest of this testosterone-fueled company…read more [FilmCritic]

The Losers follows Kick-Ass into the cinemas by a matter of weeks, and is certainly nowhere near as good, subversive or as much fun. Where it deviates is clear though, and it is all a matter of consequence. In Kick-Ass the violence hurts, and bringing superhero sensibilites into the real world has a logical, visceral consequence. In The Losers though it is one outrageous set piece after another enacted in a strange violent bubble where city streets play mute witness to ridiculous firestorms of gunfire and bomb blasts; it is a self aware portfolio of violent espionage and vengeance whose initial serious and horrific incident is thrown away in favour of casual gunplay and lighthearted death dealing…read more [heyuguys.com]

The Losers is a classical action movie based on a comic strip. It does just enough nodding toward the graphics of drawn superheroes, and then gets that out of the way and settles down into a clean, efficient and entertaining thriller. It’s a reminder of how exhausting this kind of material can be when it’s brought to a manic level by overwrought directors. But “The Losers” looks, feels and plays like a real movie. There is another reason to be grateful: It’s not in 3-D. You have to treasure movies like this before they’re entirely eaten away by the marketing gimmicks…read more [Roger Ebert]

Zoe Saldana and Jeffrey Dean Morgan in The Losers A B-minus edition of “The A-Team,” the comic book adaptation “The Losers” drags you down to its level at gunpoint with its drooling fetishization of weaponry, its focus on Zoe Saldana in wee shorts, various and sundry assassinations designed with gamers in mind and more rabid mistrust of the U.S. government and its freedom-destroying institutions than you’d find at a tea party fundraiser. We’re about as far from the quasi-lefty “Bourne” franchise as a moviegoer can get. Here, when enemies or even collateral-damage bystanders are wiped out (sometimes with tranquilizer darts, more often with real bullets, though the film barely distinguishes between the two), it’s smirks and sub-James Bond-level wisecracks all around…read more [Chicago Tribune]

Originating as a DC Comics World War II series in the early ’70s, The Losers got its title from a Special Forces group who dubbed themselves “The Losers” to honor the military personnel lost under their command. This is helpful background information, because in the new version—updated for Vertigo in the mid-’00s by writer Andy Diggle and artist Jock, and now adapted into cinematic dreck of the highest magnitude—the meaning of the title gets completely lost. There isn’t a whiff of humility or self-deprecation to Clay, Roque, Jensen, Cougar, and Pooch, a collection of black-ops douchebags and our ostensible heroes. Even when they’re off saving two dozen Bolivian schoolchildren from an impending air attack, they seem motivated less by compassion than by the dumb adventure of it. Anything to add to their mythos…read more [A.V. Club] The Losers Video Review [youtube]http://www.youtube.com/watch?v=nMnZnH7JQqA[/youtube]
Continue Reading
Advertisement
You may also like...
Related Topics:Chris Evans, Columbus Short, Idris Elba, Jeffrey Dean Morgan, Sylvain White, The Losers, Zoe Saldana