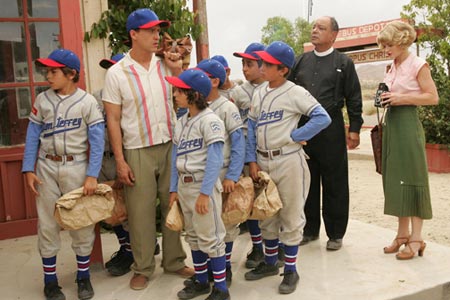 From Lionsgate, comes the new trailer and poster for independent drama “The Perfect Game” for all you baseball movies fans out there.
In 1957, in the pews of San Juan Bautista Church, Angel Macias and other boys of Monterrey’s slums try to escape the dismal conditions that surround them. Hunger, broken homes, alcoholic parents, dirt floors, corrugated shacks for houses—life holds anything but promise for these forsaken children. But there is one ray of light. After Mass on Sundays, their priest gathers them around an old radio where they listen to Spanish broadcasts of the Brooklyn Dodgers. A chance encounter with the Mexico City All-Star traveling team inspires Angel and his friends to form an organized Little League team. Their dream: to play one real game in the United States. But first they must build a field and find a coach. Director: William Dear Writer: W. William Winokur Cast: Clifton Collins Jr., Cheech Marin, Emilie de Ravin, Jake T. Austin, Moises Arias, Jansen Panettiere, Louis Gossett Jr., Bruce McGill “The Perfect Game” will hit the theathers on August 8, 2008. Trailer:
[youtube]http://www.youtube.com/watch?v=fhPqphB2lU0[/youtube]
Promo:
Continue Reading
Advertisement
You may also like...
Related Topics:Clifton Collins