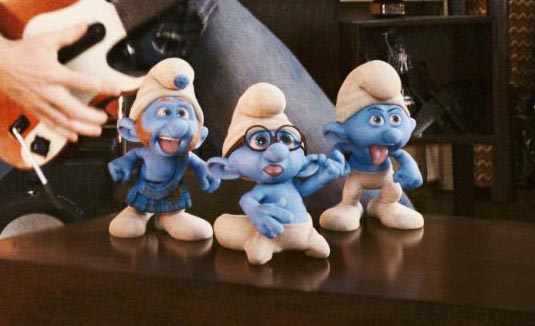 Columbia Pictures has released the first trailer for The Smurfs movie.

Scooby-Doo director Raja Gosnell takes the helm for this 3D live action/CGI comedy based on the popular characters created by Belgian cartoonist Peyo (aka Pierre Culliford).

Neil Patrick Harris in The Smurfs (2011)

Synopsis: Set in the Middle Ages, the evil wizard Gargamel (Hank Azaria) discovers the Smurf’s village and chases them into some woods. The Smurfs get scattered and Clumsy Smurf (Yelchin) wonders into a “forbidden” grotto and some of the other Smurfs follow. Since it’s also a blue moon, a magical portal within the grotto transports them into Central Park in New York. They take shelter with a married couple (Neil Patrick Harris and Jayma Mays) and try to find a way back to their village before Gargamel finds them.

Watch the first full-length trailer for The Smurfs embedded below.  Post you opinion about it and if you’d like it or not