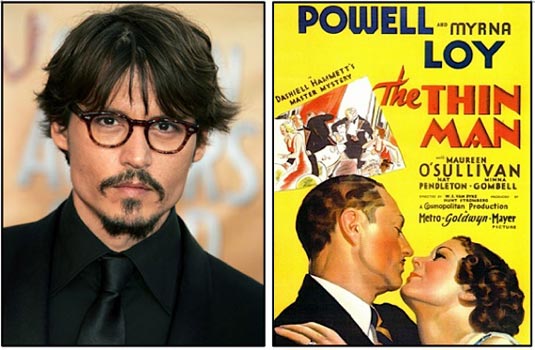 Warner Bros. has put their remake of The Thin Man on hold, rumor has it – because of the proposed $100 million budget. The studio has also recently put other big-budget projects on ice, including Arthur & Lancelot and Akira (damnation!). Production was originally set to begin in November, with Johnny Depp attached to star and Rob Marshall to direct. Now it isn’t known when shooting may start, although it is said there is no rush to get the project going since Johnny Depp wants to take some time off between movies. They still haven’t found an actress to play Nora yet as well. The story, adapted from Dashiell Hammett’s novel, centers on Nick Charles (Johnny Depp), a hard-drinking former private investigator who takes on a murder case with his wealthy new wife, Nora. William Powell and Myrna Loy played Nick and Nora in the 1934 original version of The Thin Man. The studio denied allegations that The Thin Man had not been officially greenlit, although there is still no confirmation on when production will begin. Rob Marshall will likely shoot the fantasy musical Into the Woods next. The Thin Man should come to theaters (unless the postponed production also postpones the release) in 2013.
Continue Reading
Advertisement
You may also like...
Related Topics:Akira, Arthur & Lancelot, Into the Woods, Johnny Depp, Rob Marshall, The Thin Man