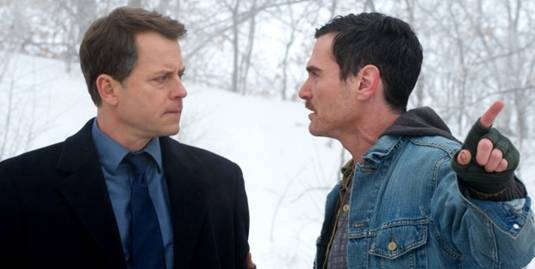 Speaking briefly, ‘Greg Kinnear and Billy Crudup swindle Alan Arkin in Wisconsin.’ Directed by Big Love producer Jill Sprecher, Thin Ice might be twisted suspense comedy, but it’s rather a cold, hard drama, which co-stars Lea Thompson (Mickey’s wife), David Harbour and Bob Balaban. Well, in Wisconsin-set indie titled Thin Ice Kinnear (As Good as It Gets) plays an insurance agent called Mickey Prohaska, massively under debt, who has the idea to steal from a client — as all hopeless people do. Opposite him Crudup (Almost Famous) plays a guy who installs security systems, but he’s not completely normal. The two finds them in a touchy situation when one commits a crime and the other finds himself a witness. Arkin (Little Miss Sunshine) plays one of Kinnear’s customers, the lonely retired farmer unaware of the true value of one of his possessions. The film, previously titled The Convincer, premiered at last year’s Sundance and has received mostly positive reviews from critics. Thin Ice gets a limited release February 17th 2012, the same weekend as Ghost Rider: Spirit of Vengeance, The Secret World of Arrietty, and This Means War. The first trailer and poster arrived, so check them out below.