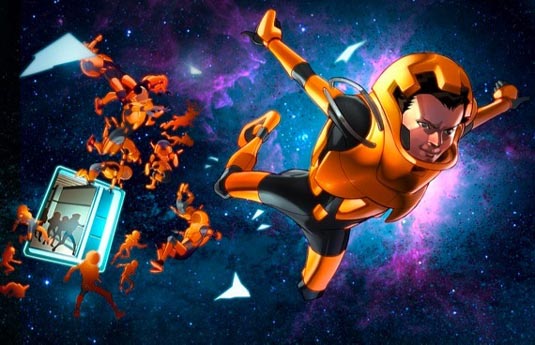 First launched earlier this year, the production blog for Gavin Hood‘s upcoming Ender’s Game has now been soliciting fan questions with answers provided by producer Roberto Orci. “One thing I can tell you is that Gavin Hood is a gigantic Stanley Kubrick fan, and it shows,” Orci writes. “And yet, in some of the Zero-G battles, things are going on that Kubrick never had a chance to tackle.  The technology and advancements in film making available to us allowed us to realize a vision that is totally unique and modern while also being, as Harrison Ford calls it, one of the most emotional science fiction movies he has ever seen.” Orci also talks about the intense physical training the actors are going through to capture as accurately as possible the fighting shape that the young soldiers are in in Orson Scott Card’s original novel. “The cast has told great stories of not only going to Space Camp,” he continues, “but also having to undergo a form of boot camp with a no nonsense instructor who taught them how to march properly in unison and much more.  And when they screwed up they were ordered to do push ups! They got in shape trust me. It’s painful for my self-image to see so many young kids with six pack abs.” Currently filming for a November 1st, 2013 release, the adaptation stars Sir Ben Kingsley, Harrison Ford, Hailee Steinfeld, Abigail Breslin, Viola Davis and others.
Continue Reading
Advertisement
You may also like...
Related Topics:Abigail Breslin, Ben Kingsley, Ender's Game, Gavin Hood, Hailee Steinfeld, Harrison Ford, Roberto Orci, Stanley Kubrick, Viola Davis