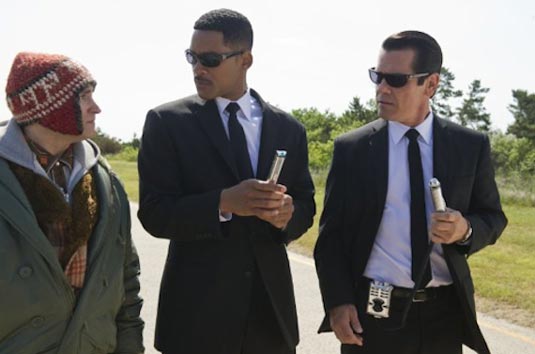 Will Smith kept his Men In Black 3 director Barry Sonnenfeld on his toes while filming the new movie as he would frequently grab the filmmaker and wrestle him to the ground. The pair has maintained a close friendship since shooting the first installment of the alien action comedy in 1997 and Smith often let loose on the set of the new sequel by messing around with Sonnenfeld whenever the cameras stopped rolling. And Men In Black 3 co-star Michael Stuhlbarg admits their playful nature kept the cast and crew entertained. He tells the New York Post, “Will was always grabbing him and wrestling around. They have a long friendship and it’s very funny and very eccentric, and you never know what is going to happen. Put them together, and it’s like a flash fire.” But Sonnenfeld hasn’t always enjoyed his playful bouts with Smith – the actor accidentally knocked out the director during production on 2002’s Men In Black 2 after attempting to show off his new fighting skills from filming boxing biopic Ali. Source: IMDb
Continue Reading
Advertisement
You may also like...
Related Topics:Barry Sonnenfeld, Men In Black 3, Michael Stuhlbarg, Will Smith

Updates from the Set of ENDER’S GAME
Prometheus Writer Hints at Sequel: Story Could Continue in Cool Ways
Advertisement