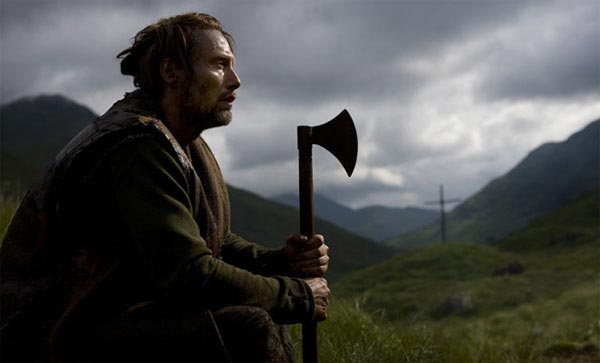 Today we have a trailer for Danish director Nicolas Winding Refn‘s latest film called “Valhalla Rising.” The movie will promote the teory that an expedition of Vikings from Scotland reached North America centuries before Christopher Columbus. Most historicans now accept that Vikings beat Columbus to the New World. Voyages are described in Norse sagas and evidence has been found to prove their presence on the continent. “Valhalla Rising” will though be shot as a fictional movie, in Nicolas Winding Refn’s documentary style. For years (in 900 A.D), One-Eye, a mute warrior of supernatural strength (Mads Mikkelsen), has been held prisoner by the chieftain Barde. Aided by a boy, Are, he kills his captor and together they escape, beginning a journey into the heart of darkness. On their flight from bounty hunters, One-Eye and Are board a Viking vessel for Norway, but the ship is soon engulfed by an endless fog that first disintegrates as they sight an unknown land. As the new land reveals its secrets and the Vikings meet a ghastly fate, One-Eye discovers his true self.

“Valhalla Rising” is set to premiere in Denmark and in Finland in August this year, however it doesn’t have a US distributor yet.
Continue Reading
Advertisement
You may also like...
Related Topics:Mads Mikkelsen, Nicolas Winding Refn, Valhalla Rising