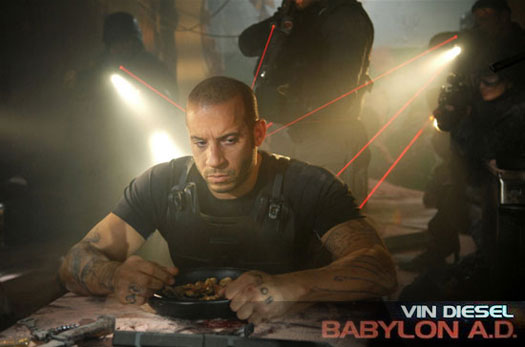 Vin Diesel‘s next movie Babylon A.D. has had its running time drastically chopped by studio 20th Century Fox. Twitch Film reports that the original cut, which ran 2 hours and 40 minutes, has been slashed to 90 minutes for its UK release. The British Board of Film Classification (BBFC) has also awarded the film a 12A rating, suggesting that much of the action and violence from the film has been cut. Babylon A.D. stars Vin Diesel as a mercenary who escorts a woman from post-apocalyptic Russia to New York. The pair find themselves tracked by a cult who want to use the woman to genetically engineer a Messiah. Michelle Yeoh, Mélanie Thierry, Gérard Depardieu and Charlotte Rampling star in the Mathieu Kassovitz-directed film. Babylon A.D. is scheduled for release on August 29.
Continue Reading
Advertisement
You may also like...
Related Topics:Babylon-A.D.

On the James Bond set
Daniel Craig on the set in Siena, Italy
Advertisement