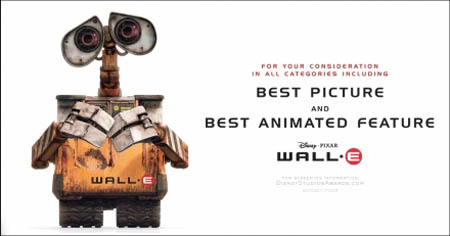 Disney have started their campaign pushing “WALL – E” – the cutest robot ever – for a nomination in both Best Animated Feature and Best Picture Oscar, an award never won by an animated film, at the upcoming Academy Awards starting with a campaign this week. Walt Disney Studios Chairman Dick Cook told the New York Times, “If we didn’t do it, I don’t think we’d be giving the movie its due.” Only one animated film has ever had the honor to be nominated in the Best Picture category, Disney’s 1991 film “Beauty and the Beast,” before the Academy started the Best Animated Picture award in 2001.

Continue Reading
Advertisement
You may also like...
Related Topics:WALL-E