“When in Rome” is a romantic comedy marketed as a product of “the studio that brought you The Proposal.” Disney’s Touchstone label is trying to strike lightning in a bottle again and imitate the success of Sandra Bullock’s summer hit. Although it falls short of that goal, When In Rome is entertaining, full of laughs and, as far as chick flicks go, is a sweet, romantic trip worth taking for audiences so inclined. Toplining Kristen Bell as a romantically challenged career woman who takes coins from a “magic” fountain and soon finds herself pursued by their original owners, the film should land a decent, if not “magic” amount of coins at the box office and have a happy ending on DVD…read more [Box Office] Cute couple? Check Romantic location? Check. “Obstacles” to romance? Yup. “Wacky,” witty friends of each young lover? Check and check. But if it was just a formula, then you could hire any hack — say, the chap who did Ghostrider, to turn Kristen Bell into America’s new sweetheart in When in Rome. Bell, a petite, pretty blonde, may or may not have the Meg Ryan-Julia Roberts-Sandra Bullock goods. When in Rome, a leaden variation on that rom-com recipe, fails utterly to make her case…read more [OrlandoSentinel] 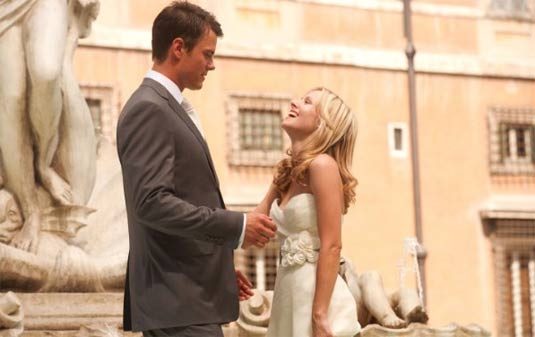 Josh Duhamel And Kristen Bell In When In Rome There is a difference between what’s sweet and funny and what’s creepy and moronic, although the makers of the dismal romantic comedy When in Rome don’t seem to understand the difference. In the interest of never having to watch a movie so inept again — and to save you all from the same fate — I offer a quick primer: Rule No. 1: If, in your movie, a bunch of weirdos in Italy fall suddenly in love with a pretty Guggenheim curator (Kristen Bell) just because she removes their coins from a magical love fountain, and they follow her home to New York and begin terrorizing her, such actions are called stalking. It’s not cute. It’s actionable…read more [MiamiHerald]

When in Rome Poster f she had seen junk like “The Proposal,” Guggenheim museum curator Beth (Kristen Bell) would know that being an uptight workaholic ain’t gonna land her a man in a romantic comedy these days. Luckily, at her sister’s wedding in Rome, Beth hits it off with Nick (Josh Duhamel), which might lead to love if Beth didn’t trigger a magic spell causing obnoxious suitors (Danny DeVito, Will Arnett, Dax Shepard, Jon Heder) to automatically fall in love with her. Wait, what?…read more [Chicago Metromix]

Josh Duhamel And Kristen Bell In When In Rome There is also a practical problem that the filmmakers fail to solve. Duhamel is more than a foot taller than Bell and neither director Mark Steven Johnson nor Bailey can figure out how to effectively get them in the same shot, fatal for a movie romance. The spiral-ramped Guggenheim is good for a visual joke or two, but is pretty much a missed opportunity in this inopportune affair…read more [Philadelphia Inquirer]

Kristen Bell in When in Rome Bell and Duhamal have only one great scene together, set in one of those trendy restaurants where patrons can dine in complete darkness. They’re served by a waitress (Kristen Schaal) in night-vision goggles, who wanders into frame, delivers her whacked-out lines with the timing of a born comedienne and promptly walks off with this entire movie. This character, so secondary you won’t even catch her name, is a painful reminder of all that’s missing from When in Rome. Back in the heyday of the romantic comedy, someone would have made an entire film about this wonderful, daffy creature. But in today’s rom-com, we get to watch Kristen Bell jogging instead…read more [CBC.ca]

Kristen Bell in When In Rome When In Rome Video: [youtube]http://www.youtube.com/watch?v=EN35gkccSZ4[/youtube]
Continue Reading
Advertisement
You may also like...
Related Topics:Josh Duhamel, Kristen Bell, When in Rome

Edge of Darkness Review
From Paris With Love Review
Advertisement