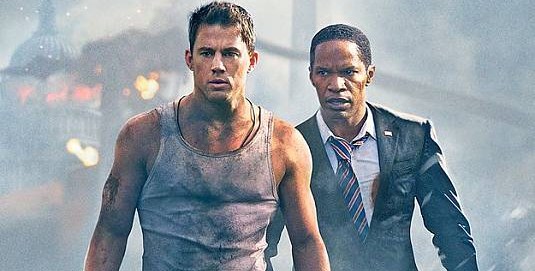 After yesterday’s new trailer for the upcoming action thriller White House Down, Columbia Pictures has revealed a brand new poster with Channing Tatum and Jamie Foxx. As you’re about to see – nothing spectacular about this new image, just a little reminder that next month – it all goes down… Roland Emmerich directed the movie from a script written by James Vanderbilt, and the whole thing revolves around Tatum’s character – Capitol Policeman John Cale who has just been denied his dream job with the Secret Service of protecting President James Sawyer, played by Foxx.

Not wanting to let down his little girl with the news, he takes her on a tour of the White House, when the complex is overtaken by a heavily armed paramilitary group. Now, with the nation’s government falling into chaos and time running out, it’s up to Cale to save the president, his daughter, and the country.

White House Down also stars Maggie Gyllenhaal, Jason Clarke, Richard Jenkins and James Woods, and the movie is set to open on June 28th, 2013. Click on the poster to take a better look & stay tuned for more updates!

Red Band Trailer & Poster For AFTERSHOCK, Opening Next Friday!
‘It’s Gonna Be a Bloodbath’: The Latest Poster For THE HANGOVER PART III!
Advertisement