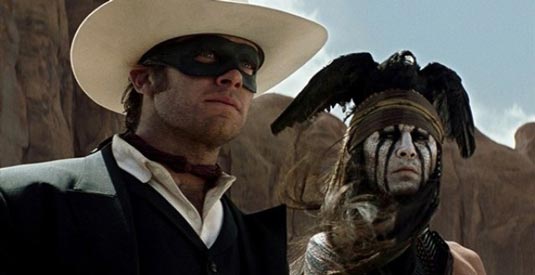 We’ve heard recently a bit about Disney’s long-awaited adaptation of The Lone Ranger – mostly regarding the film’s production issues. However, the film’s star Armie Hammer recently offered a bit more insight into the main character, which he describes as a vigilante comparable to Batman and, to a lesser extent, Spider-Man. Here’s what the actor had to say for the latest issue of Empire magazine: “It’s the rock ‘n roll Lone Ranger, actually. Our take is darker and more complex, more action-packed and more badass than the old TV show. It’s a 21st century version of the character you know. There’s a little of the Dark Knight in him. There’s less moral ambiguity, but there are definite similarities. They’re both vigilantes who feel they have to wear a mask to serve justice because the people who are supposed to be doing it aren’t. I think The Lone Ranger will always resonate with people as a seeker of justice in the same way Spider-Man or Batman does. And I think we’re doing a great job of making the character accessible to everyone, from the seven-year-old kid who brings his cap gun to the theatre to the 80-year-olds who remember the original radio show.” Directed  by Gore Verbinski, The Lone Ranger is currently set for July 3rd, 2013 release and it also stars Johnny Depp, Helena Bonham Carter, William Fitchner, James Badge Dale and others.
Continue Reading
Advertisement
You may also like...
Related Topics:Armie Hammer, Dark Knight, Gore Verbinski, Helena Bonham Carter, James Badge Dale, Johnny Depp, Spider-Man, The Dark Knight, The Lone Ranger, William Fitchner

Arnold Schwarzenegger Will Reprise the Role of Conan in THE LEGEND OF CONAN Reboot
Matthew Vaughn Drops Out of X-MEN: DAYS OF FUTURE PAST
Advertisement