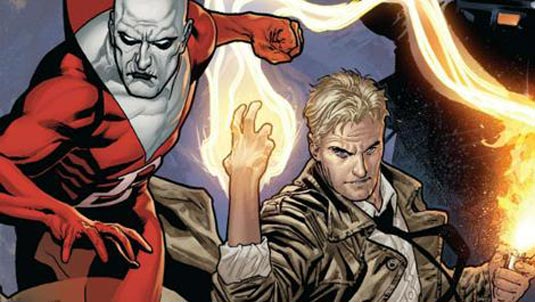 During Saturday’s panel for Pacific Rim at WonderCon, director Guillermo del Toro said that John Constantine – and he emphasized he l’ be blonde here – will be the main character in his planned Justice League Dark movie tentatively titled Dark Universe. (Ok, it would be REALLY nice to get a grip and decide what’s it gonna be with that title. Is it Justice League Dark, or Dark Universe or the third one, I forgot what was it??) Constantine will be the central figure around whom the League will round up. The director also revealed that the film won’t be an origin movie, but with each character already established, elements of their backstory will come into play during the course of the movie. (For example, Swamp Thing is now at peace with who he is, but Deadman will still be in search of the man who murdered him.) In addition to Constantine, Deadman and Swamp Thing, del Toro added that the team’s members will include Etrigan the Demon and Jason Blood, whose past with Merlin’s Knights will be mentioned. (Zatanna and the Spectre have also been previously mentioned as members.) He said they have finished the ‘bible’ for the movie and hope to start the screenplay soon with a writer as of yet still unknown to public. But, don’t start jumping already, since the Dark Universe will not be on the line for a while yet, as he said he expects to shoot Crimson Peak after Pacific Rim is done.