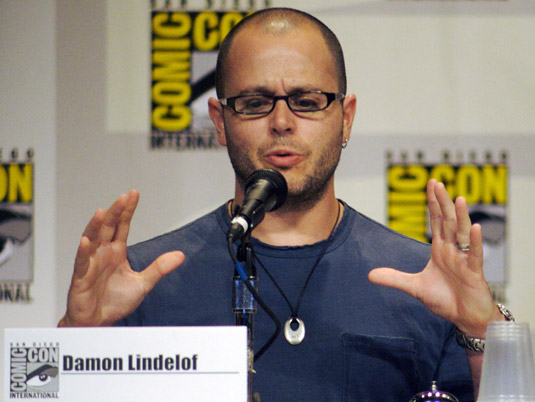 So, what do we know about the upcoming Ridley Scott‘s Prometheus? We know that it’s going to be a sci-fi action spectacle. That’s for sure.

We also know that the movie was originally developed as an Alien prequel. And, that some great cast is on board, because Logan Marshall-Green, Noomi Rapace, Michael Fassbender, Charlize Theron, Rafe Spall, Idris Elba, Sean Harris and Kate Dickie are all set to star in it.

But we hate the fact that the plot details are still a mystery and that, beside above mentioned things, we know absolutely nothing about this project!

So, thank God somebody finally revealed some interesting details about the whole thing! And that person is Damon Lindelof, man responsible for the Prometheus story, who appeared on the Kevin Pollak’s Chat Show and spoke at length about the genesis of Prometheus and its connection to the Alien universe.

Here’s what he had to say: “It started as an ‘Alien’ prequel. That is what everybody wanted it to be. Obviously, Ridley Scott has not made a science fiction movie in 25 years, sinceBlade Runner, so the idea that he’s returning to this genre is huge. But there is a real issue which is – what is the state of the ‘Alien’ franchise at this point in our lives? There has been ‘Alien vs. Predator’ and all these things, and its been completely and totally diluted. I’ve always felt that really good prequels should be original movies.

And the sequels to those prequels should not be the movie which already exists because, with all due respect to anyone who makes a prequel, but why would you ruin the greatest twist in the history of cinema, “Luke, I am your father”, by showing me three movies which basically spoil that surprise. You can do movies which take place before ‘Star Wars’, but I don’t need to see the story of the Skywalker clan. Show me something else which I can’t guess the possible outcome of. There is no suspense in inevitability. So a true prequel should essentially proceed the events of the original film, but be about something entirely different, feature different characters , have an entirely different theme, although it takes place in that same world. That was my fundamental feeling about what this movie wanted to be.”

“And truth be told” – continued Lindelof – “it wasn’t script doctoring in the strictest sense because the draft that existed before I came on was written by this guy named Jon Spaihts and it was very good. And there were a lot of things in the movie, ‘Prometheus,’ which were Jon Spaihts’ and I feel like somewhere in the media reconstruction of this story, the tale is that I come in, I pitch an entirely new story, and its so original that everything else gets thrown out and that’s what we’re doing. In my brain, that’s not exactly what happened.

But I also do feel that this movie is the movie I would want to see as a fanboy, take place in that ‘Alien’ universe, which precedes the events of the original Alien, but is not necessarily burdened by all the tropes of that franchise with Facehuggers and Chestbursters, and all that stuff that I love… but its sorta like, we’ve seen it before, can we do something different this time? And thats the movie that Ridley wanted to make. And when you’re working with an auteur, you basically just shut your mouth and listen and try to transcribe and channel the vision of that person, and get out of the way.”

As you already know, Prometheus will hit the theaters on June 8th, 2012 in 3D.

We brought you some interesting details from the interview that we definitely recommend you to check out right here on FilmoFilia!