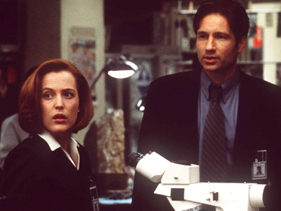 They’ve been screaming “We want to believe!” for years — but fans of “The X-Files” finally have something real to crow about, with news last month that the seminal TV series is making its way back to theaters in 2008. “Finally!” is how Nicolas Lea, who played baddie Alex Krycek, reacted to the announcement. “This story had been percolating for a long time. I feel like if this movie has half the quality and integrity of the series, it will pull in not only past fans of the show, but a whole new generation of X-Philes.” His sentiment was echoed by “Deadwood” alum W. Earl Brown, who made a guest appearance during the final season of “The X-Files.” “As a fan, I spent a year or so after the finale of the series keeping track on the movie’s development,” he said. “So, to hear that it is now actually happening is quite exciting.” Starring David Duchovny and Gillian Anderson in their familiar roles as Special Agents Mulder and Scully, the first “X-Files” movie opened in 1998. For fans, it seems as if the sequel has been in development hell ever since then, held up because of a contentious legal battle between series creator Chris Carter and Fox. But even with a script finished for years, little is known about the actual plot of the upcoming film. With that in mind, MTV News raided the Syndicate and even contacted the Lone Gunmen to try to get some breaking news on the upcoming movie. In the end, we had to concede that, while the truth may be out there, it’s in fewer hands than a Black Oil vaccine. “I am not one of those fans who clamor at any scrap of plot news,” Brown confessed. “I’ve heard that it is a stand-alone plot. Outside of that, I don’t want to know anything else. I like being surprised.” But even a desire for surprise didn’t stop former castmembers and fans from vocalizing their sequel wishes. And for a show about conspiracies, hidden motives and powerful conflicts, they sure were unanimous in their support for a film unconnected to the show’s nine-season “mytharc,” which centered on Mulder’s quest to discover the truth about his sister’s disappearance, alien war and the mysterious substance known as Black Oil. “I’d love to see one of their stand-alone weird episodes done as a movie,” “Southland Tales” writer/director Richard Kelly insisted. “Just something really trippy that doesn’t tie into the whole Black Oil thing.” Funnyman Seth Rogen agreed with that sentiment. “I was a pretty big ‘X-Files’ fan, [but] they kind of played the Black Oil thing into the ground,” he said. “They kind of wrapped it up pretty good in the last one.” So, if not Black Oil, what do former castmembers want to see? It’s not so surprising: themselves. “I’ve bumped into former castmembers who are pretty choked at not being in the film,” revealed Lea, whose character’s long-running rivalry with Mulder made him one of the show’s most popular villains. “I was a little bummed at first, but I feel like maybe Krycek was actually dead when that bullet went through his head! … It would be nice, however, to see riotous fans hit the streets of all major cities, protesting the conspicuous absence of the missing characters.” No need to bring such force to bear for recurring character Morris Fletcher, joked his portrayer, legendary improv actor Michael McKean. “I predict Morris will steal the movie with his dynamite cameo, shot in the Bahamas or Prague,” McKean quipped. Which characters ultimately make it in is incidental, Rogen said. Above all else, there’s one final bow that needs to be tied for fans to go home happy. “I want to see [Mulder and Scully having sex],” the “Knocked Up” star announced, alluding to the long-simmering romantic undercurrent between the show’s two leads. “That’s the only thing that will satisfy my Mulder and Scully jones.” Could a Mulder/Scully kiss finally be in the cards? Maybe. But according to “Circus Sideshow” master Jim Rose — who appeared in a fan-favorite ep with his fish-eating sidekick, the Enigma — if there’s one thing you can learn from “The X-Files,” it’s to “expect the unexpected.” The truth will be revealed July 25, 2008.
Continue Reading
Advertisement
You may also like...
Related Topics:

Will Juno Fit In With Ferris Bueller, Jeff Spicoli, Other Memorable Movie Teens?
Amy Adams’ ‘Enchanted’ Role Might Be Her Ticket To Happily Ever After
Advertisement