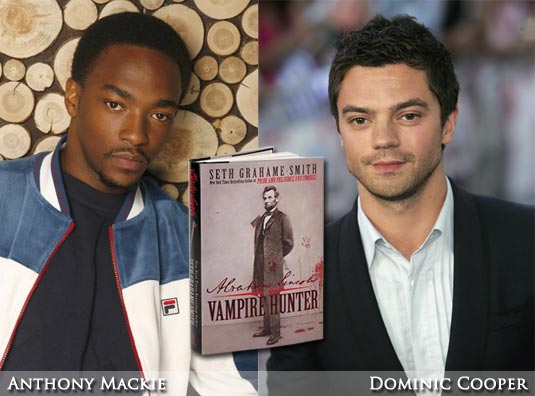 An Education’s Dominic Cooper is now in final negotiations to take the role in a Abraham Lincoln: Vampire Hunter. The Hurt Locker’s Anthony Mackie is also close to a deal to play Abraham’s best mate, Will. Last week, rumors get started and spread that prank rapper and no thought of departing Joaquin Phoenix was being eyed by Timur Bekmambetov and 20th Century Fox to play Henry Sturgess in a new “Abraham Lincoln”. Well, it seems like Phoenix put his smart phone down on Thursday and passed on the part. Now, Fox is negotiating with The Devil’s Double star Dominic Cooper to play Abe Lincoln’s mentor Henry, the mysterious ageless guy who teaches Abe to kill bloodsuckers. Sturgess is a novel key character (which Seth Graham-Smith himself has adapted for the screen): a pretty friendly vampire that saves young Abe’s life in the middle of a fight. He keeps on mentoring the youngster in the ways of understanding and, more importantly, killing villain’s fiends. His diaries serve as story bound for the book, as well. Star of ‘The Hurt Locker”, 8 Mile and the upcoming The Adjustment Bureau, Anthony Mackie, will play a character named Will, who is most likely William Seward, Lincoln’s best friend in the book and a fellow vampire hunter. In a real life, Seward was Lincoln’s Secretary of State. Director Timur Bekmambetov (Wanted) is putting together a group of up and comers  to headline the movie. That’s a smart move since it keeps costs down but by the time the film opens next summer, Mackie and Cooper could be better known. According to a previous Slashfilm there are still several other major roles to cast in the movie — a young version of Lincoln; his father; Ann Rutledge; Mary Todd; John Wilkes Booth and probably Edgar Allan Poe. Benjamin Walker has already taken place as Lincoln. Bekmambetov is currently in pre-production, aiming for a set release date on June 22, 2012. What’s your opinion on Mackie and Cooper joining the film?
Continue Reading
Advertisement
You may also like...
Related Topics:Abraham Lincoln: Vampire Hunter, Anthony Mackie, Dominic Cooper, Joaquin Phoenix, Timur Bekmambetov

D.J. Caruso to Direct Beat the Reaper, Leonardo DiCaprio to Star?
Gosling and Refn Going Into The Future With Logan’s Run Remake
Advertisement