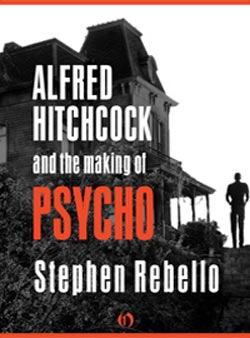 Ok, here’s something interesting for all Alfred Hitchcock‘s fans out there! As you already know, one of the best horror movies ever – Psycho celebrated its 50th anniversary on June 16, 2010.

And was there some better way to celebrate the whole thing than to release an ebook version of Stephen Rebello‘s classic non-fiction study of the film titled Alfred Hitchcock and the Making of Psycho? Guess not…

So, now is the perfect time for us to remind you that another June 16 is coming.

First released on June 16, 1960, Alfred Hitchcock’s Psycho altered the landscape of horror films forever. But just as compelling as the movie itself is the story behind it.

Alfred Hitchcock and the Making of Psycho is a behind-the-scenes look inside the classic suspense shocker – and the creative genius who revolutionized filmmaking.

Author Stephen Rebello explores the creation of one of Hollywood’s most iconic films, from the story of Wisconsin murderer Ed Gein, the real-life inspiration for the character of Norman Bates, to Hitchcock’s groundbreaking achievements in cinematography, sound, editing, and promotion.

Filled with insights from the film’s stars, writers, and crewmembers, Alfred Hitchcock and the Making of Psycho is a riveting and definitive history of a signature Hitchcock cinematic masterpiece.

So, we definitely recommend you to check an ebook version of Stephen Rebello’s book on OpenRoadMedia and you will have an opportunity to read an excerpt of the first chapter right here on our site.

So, sit down, and enjoy.

When he wanted to diddle, He cut out the middle

And hung the rest in a shed.

In late November 1957, no one would have marked Plainfield as unlike any other hardscrabble, rawboned Wisconsin farm hamlet. That winter was especially raw. Ask any of the friendly townies of third- and fourth-generation German and French stock. In flat, laconic tones, they recite litanies of burst water mains and permafrost; of nights spent hunkering down against slashing winds and rains that blew east along Canada’s border. But that November also saw Plainfield mentioned in newspapers across the country. Remind these dairyland types about that little bit of business and their open faces wall up. They begin to study their shoes or make

excuses before they beg off. That month, in 1957, Plainfield police smoked out an oafish fifty-one-year-old, odd-job-and-errands-man named Ed Gein (rhymes with mean) as one of the grisliest mass murderers America ever spawned.

Long before the headlines were to brand Gein as a bogeyman, his rural, God-fearing community of seven hundred had chalked him off as a crank. A perpetually grinning, unmarried recluse, Gein rambled over 160 ruined acresonce farmed by his parents and brother. Even locals who never gave a secondthought to hiring Gein for errands or baby-sitting had wearied of his harebrained theories. He liked to rag on the whys and wherefores of criminals who fouled up, or yammer endlessly, and pitifully, about women. Plainfield-ers recall his clinical obsession with anatomy and with the sex-change operation of Christine Jorgensen. But there was more to Gein than loony talk. That came home with a vengeance with the discovery of bloodstains on the floor of Bernice Worden’s general store on November 16.

Customers had marked it as odd that Worden’s store had been closed since before noon that Saturday, her busiest day. No one had seen the steady, well-liked storekeeper since the previous day. Her pickup truck was missingfrom its usual spot. Concerned, Worden’s deputy sheriff son, Frank, let himself into the store. A late entry in Worden’s sales book (“1/2 gall, antifreeze”) triggered

Frank’s recollection of Ed Gein’s loafing about the store the previous week. Gein had asked whether Frank would be out deer hunting on Saturday. When Frank answered that he would, Gein casually mentioned he might be back for a can of antifreeze.

On Frank Worden’s tip, Sheriff Art Schley and Captain Lloyd Schoephoerster made tracks for Gein’s lonesome, decaying hermitage. The hand of death had first passed over the stark farmland when Gein’s father succumbed to a stroke in 1940. Four years later, a fire claimed the life of Ed’s older brother, Henry, and, the following year, Gein’s hellfire-and-brimstone-spouting mother met her maker, too. Now, Gein lived alone—or so it had seemed.

Gein was elsewhere when the law came to call. Schley and his officers lighted the way with kerosene lamps and flashlights; the old house was onlypartly jerry-wired for electricity. The lawmen picked their way through a rat’s nest of browning newspapers, pulp magazines, anatomy books, embalming supplies, food cartons, tin cans, and random debris. Upstairs, five empty, unused rooms

slept under blankets of dust; by contrast, the bedroom of Gein’s late mother and a living room, both nailed shut, were kept pristine.

Raking the rubble of Gein’s kitchen and bedroom, the officers uncovered sights for which no highway wreck or Saturday night special shoot-’em-up had prepared them. Grinning, loose-toothed Ed Gein did not live alone, after all. Sharing his abode were two shin bones. Two pairs of humanlips on a string. A cupful of human noses that sat on the kitchen table. A human skin purse and bracelets. Four flesh-upholstered chairs. A tidy row of ten grimacing human skulls. A tom-tom rigged from a quart can with skin stretched across the top and bottom. A soup bowl fashioned from an invertedhuman half-skull. The eviscerated skins of four women’s faces, rouged, made-up, and thumbtacked to the wall at eye level. Five “re-placement” faces secured in plastic bags. Ten female heads, hacked off at the eyebrow. A rolled-up pair of leggings and skin “vest,” including the mammaries, severed from another unfortunate.

In the adjacent smokehouse shed, police found what they would later identify as having once been Bernice Worden. Nude, headless, dangling by the heels, she had been disemboweled like a steer. Sitting atop a pot-bellied stove in the adjacent kitchen was a pan of water in which floated a human heart. The freezer compartment of the refrigerator was stocked with carefully wrapped human organs.

“I didn’t have anything to do with it. I just heard about it while I was eating supper,” mumbled Gein when Frank Worden located and confronted him about the discovery of Bernice’s corpse. Worden arrested Gein on the spot. In no time flat, Plainfield’s Caspar Milquetoast underwent a lie detector test, a murder charge, and psychiatric examinations at Central State Hospital for the Criminally Insane. Until then, no one had credited the mutterings of a shiftless crank about his “collection of shrunken heads.” No one paid any mind to his inside knowledge of the area’s many unsolved disappearances of women. The Gein farmhouse offered testimony not only to man’s fathomless capacity for the barbaric, but also to the ability of an entire community to deny its very existence. “It can’t happen here,” insists the satiric lyric of a Frank Zappa song, “Help I’m a Rock.” The “here” in question is the human heart and mind.

Gein met the probing of his examiners with barely audible, monotone ramblings. His memory was murky. He admitted to only two murders, claiming he was “in a daze” during both. No law officer, psychiatrist, or court examiner could penetrate Gein’s motivations. Yes, he admitted to dismantling Bernice Worden’s cash register and removing $41. Yes, he had also exhumed his first cadaver with a farmer crony, Gus. Yet his rationale for both was identical: He liked “taking things apart” to see “how things work.”

Deep in the night, while his hard-working neighbors made love, snored, studied the Good Book, and fretted over bills, bland, simple Ed Gein delvedinto the mystery of “how things worked” by traipsing around the farm with the skin, hair, and face mask of newly exhumed corpses strapped to his naked body. Authorities discovered that Gein’s first graveyard visit led to forty-odd other digs—always graves of females—often just a stone’s throw from the final resting place of his mother. He told his examiners that he and Gus (who had died several years earlier of natural causes) buried the bones and incinerated less-interesting body parts in the Gein stove. When newspapers reported that Gein claimed “I never shot a deer,” how many locals shuddered at the memory of plastic bags packed with tasty “venison” given them by Gein?

Gein made his first kill in 1955 when, late one bitter winter night, his .32 rifle drew a bead on a bosomy, fifty-one-year-old, divorced tavern owner. Using a sled, Gein dragged the body of Mary Hogan to his “summer kitchen” shed. Police suspected Gein of torturing and murdering at least ten other victims between Mary Hogan and Bernice Worden. He never owned up to them before being judged criminally insane and sentenced to life at Central State Hospital.

Local newspapers, some of which dubbed Gein “the mad butcher,” reported only his murders and alleged cannibalism. Transvestism, grave robbing, and, as some speculated, an incestuous relationship with Mom apparently went beyond the limits of even big-city reportage of the 1950s. For “America’s dairyland,” such topics were literally unspeakable. But what the newspapers suppressed, back-fence rumors and sick jokes spelled out. The press and theambulance chasers attached themselves to Plainfield like piranha on a drowning sumo wrestler. Cars packed with the curious drove miles to aim Brownie cameras and to stone Gein’s “murder house.” Outraged locals circled the wagons and closed their minds. Yet many natives were known to drive miles out of their way to bypass the Gein farm. Inevitably, there were cracks in the wall of denial. Physicians throughout the state found their offices packed with patients complaining of gastrointestinal symptoms. Local psychiatrists treated many ids scrambled by Gein’s penchant for “spare parts.”

Sick jokes, “Gein-ers” the locals called them, ran rampant. Setup: “How were Ed Gein’s folks?” Payoff: “Delicious,” Or “What’s Ed Gein’s phone number?,” which drew the response: “O-I-C-U-8-1-2.” And this to defuse another unspoken terror: “Why could no one ever keep Gein in jail?” Punchline: “Because he’d just draw a picture of a woman on the wall and eat his way out” Bar hounds roused boozy yuks by ordering Gein Beer (“Lots of body, but no head”), and corn-fed tykes with faces like Campbell’s Soup can kids jumped rope, chanting:

’Twas the night before Christmas

And all through the school,

Not a creature was stirring

Not even a mule.

The teachers were hung

From the ceiling with care

In hope that Ed Gein

Soon would be there.

To the day of Gein’s quiet, uneventful death on July 26, 1984 in the asylum, hospital workers described him as “tractable,” “harmless.” His awareness of the outside world was minimal. Of his crimes he was virtually an amnesiac. Perhaps hoping to purge Plainfield of the Gein legacy, unknown persons torched the farm over two decades ago. To this day, the morbid, thecrime buffs, the thrill seekers, and the marginals make pilgrimages to the ruins. And locals admit a Yuletide never passes without some child’s warbling, “Deck the halls with limbs of Mollie.”

No one can measure the shock waves unleashed by Ed Gein’s monstrousacts or the anguish he inflicted upon his victims or their survivors. In 1957, most Americans preferred to perceive themselves as God-fearing, clean-living men in gray flannel suits, or perfectly perfect Doris Day wives, or wholesome kids next door like Shirley Jones and Pat Boone in April Love. We elected apresident named Eisenhower, twirled hula hoops, and watched “Ozzie and Harriet.” But in a town less than forty miles from

Plainfield, at least one man stared hard into the bathroom mirror while shaving. He brooded over Gein, thought of himself, and shuddered.