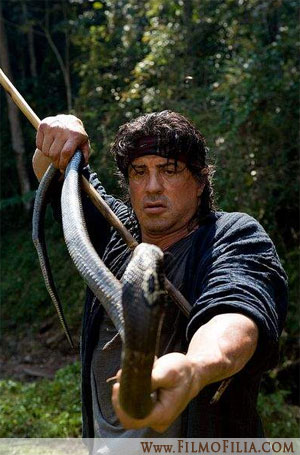 As he did with Rocky Balboa in 2006, Sylvester Stallone has resurrected his dejected Vietnam vet John Rambo for one final screen adventure. But where Rambo was once a macho symbol of 1980s excess, mowing down bad dudes in an over-the-top, comic book fashion, this Rambo — paunchy, sullen and prone to uttering fatalist statements like “(bleep) the world” — bares little resemblance to the sweat-drenched, shirtless superhero of yore. This Rambo — he introduces himself as “John” — is a hulking mass of once-toned muscle hiding beneath an oversize T-shirt, his face an aging, sorrowful slab of melting clay. And once the violence starts — oh yes, there will be blood, as well as severed limbs, spilled guts and grisly decapitations — there’s no sheath of patriotism for the audience to hide behind. It’s brutal, unsettling and appalling. “Rambo” opens in Thailand, with Rambo collecting cobras for an underground snake-fighting ring. (That can’t pay well.) He’s hired to guide a group of American missionaries to Burma, where they’ll bring aid to the citizens of the war-torn country. But when they’re captured by soldiers and held captive, it’s up to you-know-who to bring them back. Stallone co-wrote and directed “Rambo,” and its early scenes pick up where 1982’s “First Blood” left off. Rambo is more of a character here than he was in “First Blood’s” bloated sequels, and the years of wear on his used tire of a mug speak volumes about Rambo’s life since we last left him 20 years ago.  Soon, however, the violence takes over, and “Rambo” becomes just another bloodbath, with dismembered body parts flying across the screen almost as frequently as shell casings. It’s an unfortunate ending for a once-great screen character who deserves to be known for more than the waste he laid to others.
Continue Reading
Advertisement
You may also like...
Related Topics:rambo