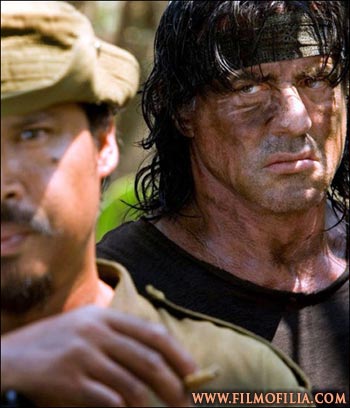 Sylvester Stallone has revealed that he feared for the safety of his crew while shooting the new Rambo movie in Thailand. The 61-year-old explained that he had decided to set the film in the Asian country rather than Afghanistan or Iraq, saying: “I thought it would be an insult to the men who are fighting, to think that a fictional character could come and change everything.” However, he said shooting in Thailand had been a sometimes frightening experience, telling The Sun: “The ongoing threat of the Burmese was the biggest danger. There were a lot of secret police and they knew exactly what was going on. “Life is very cheap over there, you can get shot and nobody will ever find you. I didn’t worry about me but I really felt bad for the crew because I thought that’s how it would start, with the intimidation of the crew. “And they did intimidate them. For a while we could not get any Burmese to work for us at all, until one man stepped up and it opened the floodgates.” Stallone is both star and director of the third Rambo sequel, which is released in the UK on February 22.
Continue Reading
Advertisement
You may also like...
Related Topics:rambo

‘Inkheart’ Pushed Back To 2009
There’s no ’New York, I Love You’- Woody Allen said
Advertisement