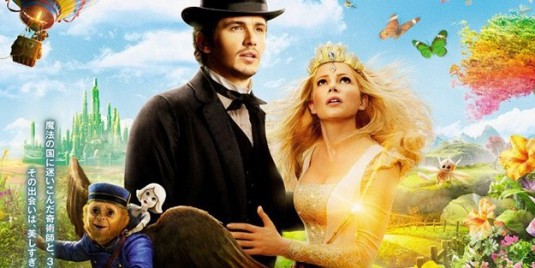 Time for another Oz: The Great and Powerful poster guys! Fantastical adventure deserves a fantastic international (or if you prefer – Japanese) poster, I’m sure you all agree with me? As usual, we’re here to remind you that Sam Raimi‘s movie opens this spring, and that this project definitely deserves your full attention, simply ’cause an awesome cast is involved in the whole thing.

Raimi directs from a script written by Mitchell Kapner and David Lindsay-Abaire which follows a stage magician hurled into a fantasy world where he must use his wits to stay ahead of three enchantresses who have plans for him.

Disney’s fantastical adventure imagines the origins of L. Frank Baum’s beloved character, the Wizard of Oz. When Oscar Diggs (Franco), a small-time circus magician with dubious ethics, is hurled away from dusty Kansas to the vibrant Land of Oz, he thinks he’s hit the jackpot-fame and fortune are his for the taking-that is until he meets three witches, Theodora (Kunis), Evanora (Weisz) and Glinda (Williams), who are not convinced he is the great wizard everyone’s been expecting. Reluctantly drawn into the epic problems facing the Land of Oz and its inhabitants, Oscar must find out who is good and who is evil before it is too late. Putting his magical arts to use through illusion, ingenuity-and even a bit of wizardry-Oscar transforms himself not only into the great and powerful Wizard of Oz but into a better man as well.

Walt Disney Pictures will release Oz: The Great and Powerful on March 8th, 2013.

Click on the poster to take a better look, and as usual – let us know what you think about this movie so far!

Also check out the Trailer just in case you missed it.