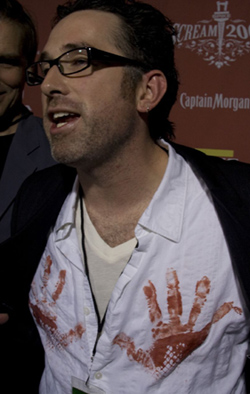 11-11-11. When you see something like this, you already know that some horror is coming. And especially when you see that Darren Lynn Bousman, (Saw II, III and IV) is attached to the project as well. So, 11 11 11 is the upcoming Bousman’s horror-thriller which is about the “11:11 phenomenon”. Or, if you prefer more details on it: “The 11:11 movement is centered on the emergence of that number in people’s lives that alerts them to angels or spirit guardians trying to communicate with them. Conspiracy theorists also point to the number 11’s involvement in historical events. The movie will actually center on “idea of 11 gates of Heaven and how on 11:11 on the 11th day of the 11th month, the 11th gate will open up and something from another world will enter the earthly realm for 49 minutes.” Bousman is in charge for the script as well, which he claims bears little resemblance to the similar-sounding 2007 numerology thriller The Number 23, which starred Jim Carrey. Bousman didn’t want to make a numerology thriller, but then he began noticing the number 11’s prominence in his life, including his birth date – Jan. 11, 1979. On the other hand, producer Wayne Rice saw that November 11, 2011 fell on a Friday and he wanted a movie to come out on that day. Rice explained that: “Bousman and I sat down and over some pasta, and the movie materialized. A lot of this has been New Age-y or biblical, with talk of angels. Leave it to Darren to see the dark side of that date.” So, production on 11 11 11 is expected to start this fall, with a release date in the U.S. currently scheduled for November 11th, 2011. With every new detail about this interesting project, we’ll be back!
Continue Reading
Advertisement
You may also like...
Related Topics:11 11 11, Darren Lynn Bousman

John Woo Wants Liam Neeson in Flying Tigers
Googled: The End of the World as We Know It Movie Adaptation
Advertisement