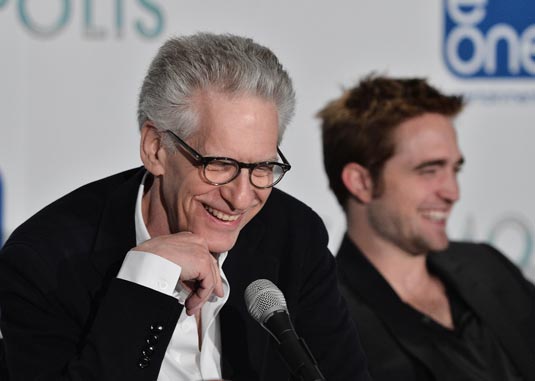 David Cronenberg‘s Cosmopolis has had its world premiere at Cannes, and though not everyone liked it, in general it had really good reactions. Which is good, I think, since his movies shouldn’t be for everyone. We finally know the US release date – August 17th, 2012, which is more than a month after Canadian (tomorrow, June 8th), and even UK (a week later), but still earlier than expected. His son, Brandon Cronenberg, has had his first major feature debut this year at Cannes, too, with Antiviral, a film that presents ‘a clinic that harvests live viruses from sick celebrities and then sells them to the celebrities’ rabid fans.’ The film was pegged out of the fest as being full of body horror concerns, and a high creep-out factor, which sounds like what we’d hope for out of a film that concerns such a clinic. It stars Caleb Landry Jones, Sarah Gadon (also in Cosmopolis), Douglas Smith and Malcolm McDowell, and picked good reviews at the fest. In fact, Antiviral emerged as one of the stronger genre showings at this year’s fest, and triggered positive comparisons to the early work of David Cronenberg. Now as the comparisons of celebrities and their children who happen to enter into the same line of work usually end up in favor of the parents, many of those second-gen-filmmakers don’t like being compared to their more famous parents. But in this case, it can only serve as a compliment. His film has been picked up for distribution by IFC Midnight, which means that it will likely get a limited theatrical release and possibly a simultaneous VOD and digital platform release. We got our hands on a trailer: [youtube]http://youtu.be/8Qy_xWSVhzw[/youtube] Synopsis:

Syd March is an employee at a clinic that sells injections of live viruses harvested from sick celebrities to obsessed fans. Biological communion – for a price. Syd also supplies illegal samples of these viruses to piracy groups, smuggling them from the clinic in his own body. When he becomes infected with the disease that kills super sensation Hannah Geist, Syd becomes a target for collectors and rabid fans. He must unravel the mystery surrounding her death before he suffers the same fate.