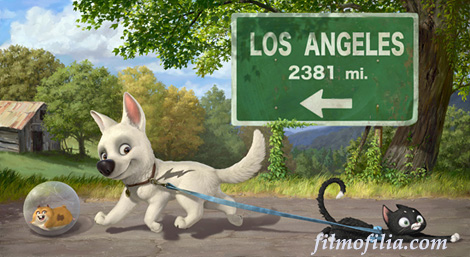 Disney has another CGI animated film in the works. It’s titled ’Bolt’ and is one of Disney’s major 3D releases for 2008. The movie is about a German Shepherd named Bolt, voiced by John Travolta, who ends up on a cross-country adventure. German Shepherd (Bolt), has lived his whole life on the set of his action TV show, where he believes he has superpowers. When separated from the studio by accident, he meets Mr. Mittens (actually a female cat) and a hamster named Rhino. Along the way, he learns that he doesn’t have superpowers and that the show is not realistic. When the star of a hit TV show is accidentally shipped from his Hollywood soundstage to New York City, he begins his biggest adventure yet, a cross-country journey through the real world with two unlikely traveling companions: abandoned housecat named Mittens (voice of Susie Essman) and a TV-obsessed hamster in a plastic ball named Rhino, Bolt discovers he doesn’t need superpowers to be a hero. ’Bolt’ directed by Chris Williams, story writer of ’Mulan’ and ’The Emperor’s New Groove’, is due in theaters next November 26th, 2008.
Continue Reading
Advertisement
You may also like...
Related Topics:Chris Williams, John Travolta