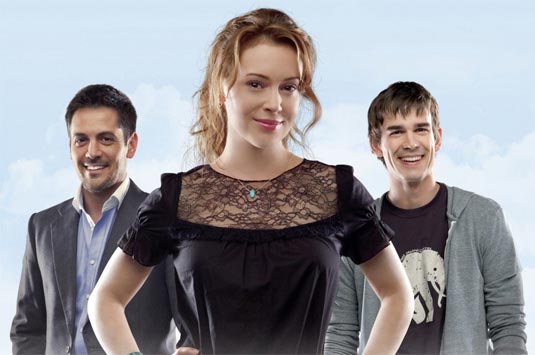 Check out the movie trailer and poster for romantic comedy My Girlfriend’s Boyfriend. Jesse (Alyssa Milano) is a sassy, intelligent woman who has yet to find ‘Mr. Right’—until she bumps into Ethan (Christopher Gorham), a writer pushed to the edge of despair after having another novel rejected by publishers. For Jesse, the encounter offers more than a chance to inspire the artist in Ethan again. It also opens a new, romantic chapter in her life… with one huge complication. Moments after meeting the perfect guy for her, Jesse meets Mr. Perfect— Troy (Michael Landes), a confident and successful advertising executive who makes almost every moment elegant and romantic. Soon Jesse is in over her head and grappling with the ultimate romantic paradox: what does a girl do when she meets ‘Mr. Right’… after already meeting the right guy?

My Girlfriend’s Boyfriend Poster The movie is directed and written by Daryn Tufts. Along with Milano and Landes the film also stars Christopher Gorham, Beau Bridges, Carol Kane, Tom Lenk and Heather Stephens. My Girlfriend’s Boyfriend will hit limited theaters in the U.S. on April 22, 2010.
Continue Reading
Advertisement
You may also like...
Related Topics:Alyssa Milano, Beau Bridges, Michael Landes