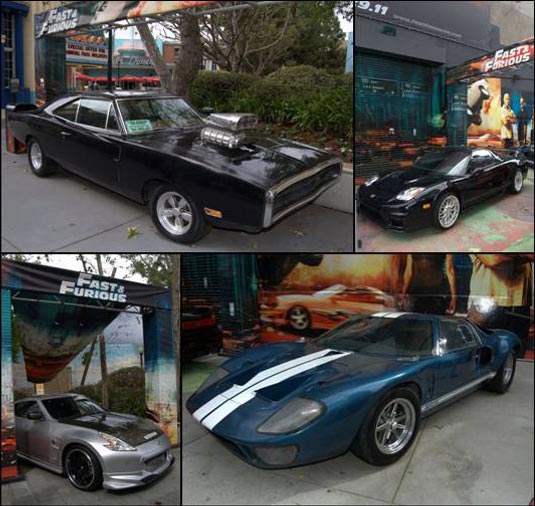 Vin Diesel, Paul Walker and Jordana Brewster lead a reunion of returning all-stars from every chapter of the explosive franchise built on speed in “Fast Five.” Newly joined by Dwayne Johnson, they take the series that hooked the world on adrenaline and amp up the action and spectacle on a global scale.

The Nissan 370z driven by Brian O’Conner (Walker), the Acura NSX and Ford GT40 driven by Mia Toretto (Brewster), along with Dominic Toretto’s (Diesel) 1970 Dodge Charger that appeared in the original film and re-emerged in “Fast Five” will be parked inside the theme park and within arm’s reach of fans and car aficionados.

Universal Studios Hollywood’s fleet of famous cars parked along the Studio Tour route currently features more than 18 recognizable prop vehicles from famous movie and TV productions, including a collection of automotive classics from the “Fast & Furious” franchise. The convoy features the 1993 Mazda RX-7 and Toyota Supra from “The Fast and the Furious,” the 2002 Mitsubishi Eclipse Spyder from “2 Fast 2 Furious” and the 1987 Buick Grand National GNX from “Fast & Furious.” These are all on display adjacent to the popular “The Fast & the Furious Extreme Close-Up” experience on the behind-the-scenes Studio Tour.

Continue Reading
Advertisement
You may also like...
Related Topics:Fast and Furious 5