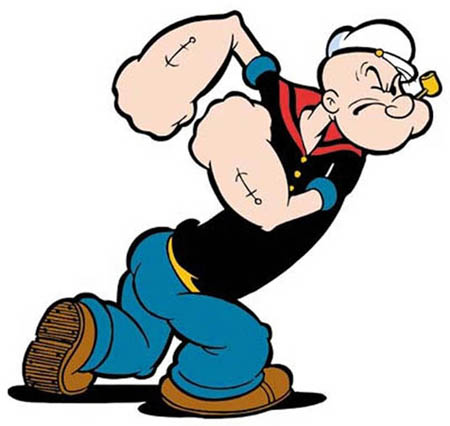 The most famous comic strip sailor Popeye is the next cartoon getting the 3D movie treatment. Just yesterday we had a little chat about Warner Bros plans that include three dimensional tentpole movies, and now it looks like Sony Pictures is bringing the beloved, tattooed cartoon to theaters. So, get ready for 3D spinach man! We already know Sony Pictures Animation’s are bringing us the Smurfs, and we also knew that a CG movie version of Popeye was going to happen thanks to Spiderman producer Avi Arad who signed on to produce the whole thing, so there’s nothing to be surprised about. Seems that Arad is very excited about it, so no wonder he said: “I literally started singing the famous Popeye song after securing the rights. What always blew me away is the level of the animation. It was so beautiful and unbelievably detailed.” Mike Jones will be the one to write the whole Popeye history, since he is in charge for movie script. We can only guess what kind of story that will be, but after hearing this: “I’m an unabashed, lifelong Popeye fan. Introducing this squinty-eyed sailor to a new generation also means reintroducing him to those who, like me, grew up with him,” from Jones, we expect only the best! Of course, Popeye won’t be alone, so the story will likely involve Popeye’s girlfriend Olive Oyl, his adopted child Swee’Pea, his hamburger-loving friend Wimpy, and his arch nemesis Bluto. And, while we’re still here, let us remind you that our loving character, created by E.C. Segar, first debuted in 1929. Popeye’s most recent incarnation was in Robert Altman‘s 1980 movie starring Robin Williams. Happy to hear this? If you liked Popeye’s adventures when you were a kid then we’re sure you will love this version as well. It could definetely be refreshing one, since it’s not like we have a chance to see this sailor on big screen every day. Popeye – Muskels Shmuskels [youtube]http://www.youtube.com/watch?v=odyYA-hk2dI[/youtube]
Continue Reading
Advertisement
You may also like...
Related Topics:Popeye