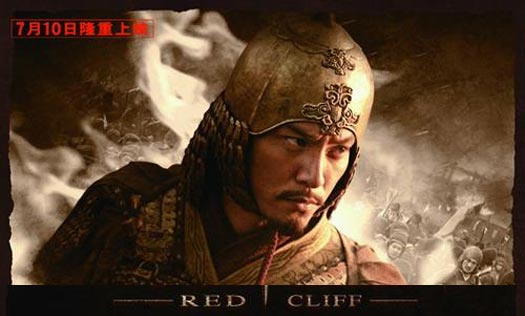 Today we’ve got character posters for the eight major characters in John Woo‘s mega production “Red Cliff” “Red Cliff‘ is movie with a budget of $36 million which is the most expensive ever in Chinese Cinema history and there are reports that the movie is over budget, running behind schedule, and actors have walked off the set, walked on, then walked off the set again. And more recently, bad news in the form of a dead stuntman has put a black cloud over the production. The film stars Tony Leung Chiu Wai, Takeshi Kaneshiro, Koyuki, Shido Nakamura, Chen Chang and Fengyi Zhang and is based on historical events that took place in China 1,700 years ago and on a chapter in the popular novel “Romance of the Three Kingdoms.” Some 600 years after its publication, the book is still widely read in China. The story is set in 208 AD, the mighty Han Empire was falling while China was controlled by warlords. Powerful northern warlord Cao Cao led his troops marching to the south in attempt to crash the south. Two warlords, Sun Quan and Liu Bei, set up an alliance to defend their territories.