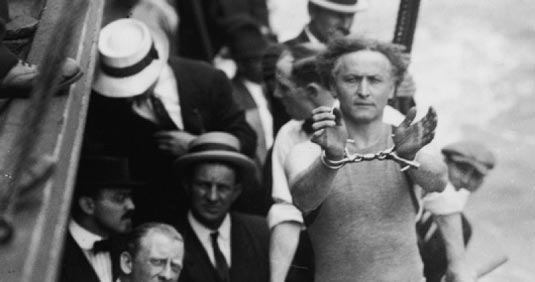 Hollywood is definitely interested into this famous escape artist and magician. That’s why we already have another Harry Houdini project, and Columbia Pictures is behind it.

At this moment we have no idea when they expect to begin filming on Houdini, but we do know that this movie will have some great team on board!

According to the latest reports, Francis Lawrence will be in the director’s seat, while Scott Frank (man behind the Minority Report story) will be in charge for the script.

And, thanks to HeatVision, we also know that “the movie will focus on the magician who is striving to expose a troubled, beautiful spiritualist as a fraud. As he becomes obsessed with her, he starts to believe she’s authentic, only to uncover what appears to be a tragic scam.”

Sounds interesting? Well, so does everything about this man!

Let us also mention that the studio has long been developing a Houdini project, attracting filmmakers such as Ang Lee, Paul Verhoeven and Robert Zemeckis over the years, but, as THR explains it, Houdini got a new act in March when Lawrence and Miller conjured up a fresh take.

So, anyone interested in this fresh take? I know you are, so make sure you stay tuned!