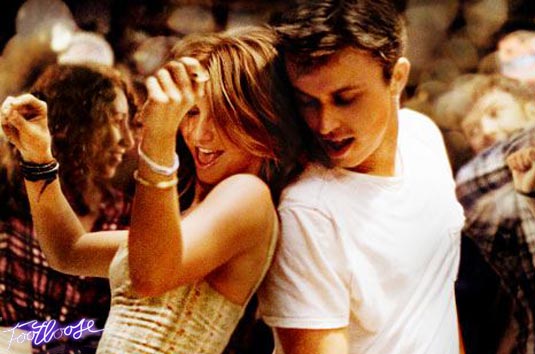 The second trailer and third poster for Footloose, featuring lots of dancing but it is not a musical in the traditional sense of the word, has arrived. Based on the original 1984 “Footloose,” the film  is directed by Craig Brewer’s, the Black Snake Moan fame and stars Dennis Quaid, Kenny Wormald, Julianne Hough (Dancing with the Stars), and Andi MacDowell. Here’s the plot synopsis for Footloose:

Ren MacCormack (played by newcomer Kenny Wormald) is transplanted from Boston to the small southern town of Bomont where he experiences a heavy dose of culture shock. A few years prior, the community was rocked by a tragic accident that killed five teenagers after a night out and Bomont’s local councilmen and the beloved Reverend Shaw Moore (Dennis Quaid) responded by implementing ordinances that prohibit loud music and dancing. Not one to bow to the status quo, Ren challenges the ban, revitalizing the town and falling in love with the minister’s troubled daughter Ariel (Julianne Hough) in the process.