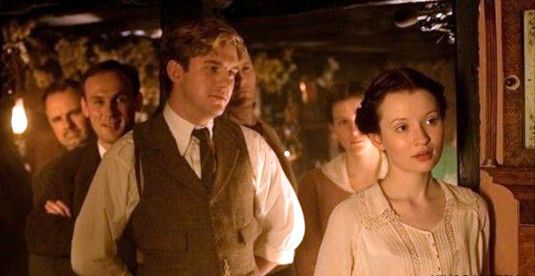 Hope you’re ready for another tragic love story, ’cause an upcoming Summer in February movie is all about – love & loss. Great cast is on board for Christopher Menaul‘s drama and includes Emily Browning, Dominic Cooper and Dan Stevens. The movie opens this June in the UK, and as you already see – we finally have the official trailer & some great images from the whole thing to share. Take a look…

Based on Jonathan Smith‘s novel of the same name, the movie tells the story of love and loss among a bohemian colony of artists which flourished in the wild coastal region of Cornwall before the First World War. Emily Browning stars as the hauntingly beautiful, enigmatic Florence Carter-Wood who flees from London, craving excitement and freedom. She joins her brother in a group of artists whose wild, bohemian world has as its star the charismatic and larger than life AJ Munnings, played by Dominic Cooper.

AJ and his best friend – soldier Gilbert Evans – both fall head over heels in love with Florence, but despite her feelings for Gilbert, Florence is mesmerized by AJ’s talent and magnetism. Too late she realizes her mistake, breaking everyone’s heart, especially her own. It is an unforgettably compelling story, deeply moving – and true.