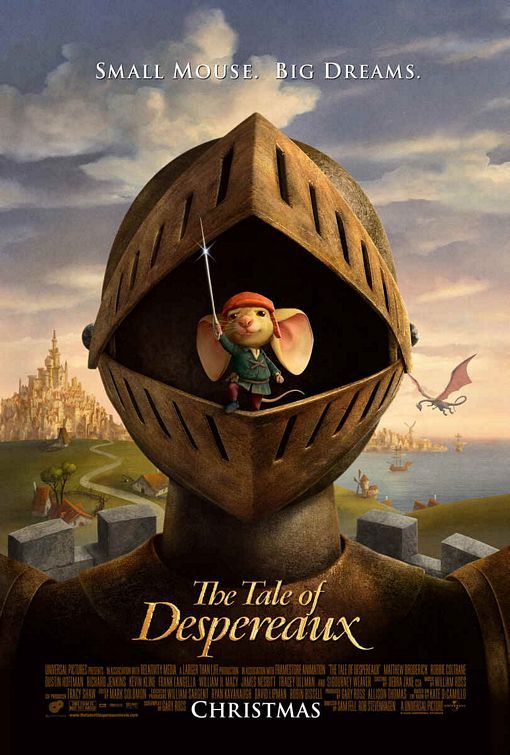 Coming Soon talked exclusively with Dustin Hoffman, Sigourney Weaver, Emma Watson and Matthew Broderick at the Los Angeles press day for their new film, “The Tale of Despereaux,” based on the Newbery Medal-winning, best-selling fantasy novel by Kate DiCamillo. Shortly after its publication, DiCamillo’s book drew the attention of four-time Oscar-nominated filmmaker Gary Ross. The two had one great thing in common: They both had a knack for telling stories about the most unlikely of heroes. For years, producer/writer Ross’ specialty has been discovering the relatable values and humanity of underdogs: a crippled horse who achieves greatness in “Seabiscuit,” a guy who becomes his better self by finding the boy inside in “Big,” and an everyman who redeems the decency of the Oval Office in “Dave.” When his wife, fellow producer Allison Thomas (“Seabiscuit”), brought the book to his attention, Ross felt the modern fairy tale would make a wonderful CG-animated movie. He responded to the novel’s humanity and believed that it treated children with dignity and gave them credit for their intelligence and depth. Ross also loved that there are no purely evil figures in DiCamillo’s story. Indeed, several of the characters only become hurtful after being hurt themselves, and each is redeemed through forgiveness. When they acquired the book, Ross and Thomas committed themselves to preserving the tone and richness of DiCamillo’s fairy tale, ensuring that the qualities that had made “The Tale of Despereaux” an instant classic would translate to the big screen. Four years later, “Despereaux” has arrived. Watch the interviews: A modern fairy tale, ”The Tale of Despereaux” tells the story of four unlikely heroes: Despereaux (Matthew Broderick), a brave mouse banished to the dungeon for speaking with a human; Roscuro (Dustin Hoffman), a good-hearted rat who loves light and soup, but is exiled to darkness; Pea (Emma Watson), a Princess in a gloomy castle who is prisoner to her father’s grief; and Mig (Tracey Ullman), a servant girl who longs to be a Princess, but is forced to serve the jailer. “Tale of Despereaux” follows a little mouse with a big ear. Outcasted by other mice due to his strange appearance, he tops it by doing what mice shouldn’t do, like befriends and falls in love with a human being, Princess Pea. But, by being different, Despereaux is up for a whole new adventure which will make him a hero. “The Tale of Despereaux” opens Friday, December 19.
Continue Reading
Advertisement
You may also like...
Related Topics:Dustin Hoffman, Emma Watson, Matthew Broderick, Sigourney Weaver, The Tale of Despereaux