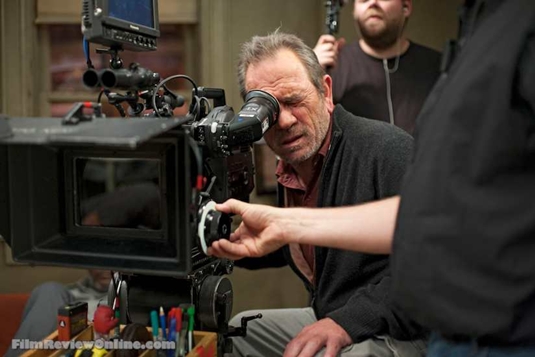 Vet star Tommy Lee Jones is lining up his next directorial project, The Homesman, a road-picture period piece based on his screenplay, which he’s also signed on to produce and star in the film. Jones is returning to the director’s chair just weeks before Sony releases Men in Black 3; the third installment in Men in Black series marks his return after a 10-year absence. After helming his directorial debut, a TNT original movie titled The Good Old Boys (1995) the multi-hyphenate also took a decade off from behind-the-camera duty, before returning to the director’s chair for the well-received The Three Burials of Melquiades Estrada. The Homesman story will track ‘a pioneer woman and a claim-jumping rascal of a man (Jones) who usher three insane women on an odyssey from Nebraska to Iowa, braving the elements along the way.’ No doubt, this pioneer period piece fits mold that Jones, a Texan, favors – a throwback drama with grit and personal pain. No production schedule or release date has been set as of yet. Oscar nominee was last seen in Captain America and will next star opposite Meryl Streep in the Sony dramedy Hope Springs. Jones also plays Republican leader Thaddeus Stevens in Steven Spielberg’s upcoming Lincoln. Check out these two trailers below and stay tuned for updates. [youtube]http://www.youtube.com/watch?v=iugrquVrMrE[/youtube] [youtube]http://www.youtube.com/watch?v=YDjspsyPnZY[/youtube]
Continue Reading
Advertisement
You may also like...
Related Topics:Tommy Lee Jones