I wish I was fast – says our cute little friend aka an ordinary garden snail in the latest trailer for Turbo. Well, some dreams are meant to come true, and that’s exactly what DreamWorks Animation‘s upcoming animated sport-comedy is all about. Ok then, what are you waiting for, find your crew, chase your dreams and take the adventure that leaves others in the dust! As you already know, David Soren‘s high-velocity 3D comedy is set to hit theaters on July 17th, 2013, and has an awesome voice-cast on board, which includes Ryan Reynolds, Paul Giamatti, Michael Pena, Michelle Rodriguez, Maya Rudolph, Snoop Dogg and Samuel L. Jackson. It revolves around an ordinary garden snail named Theo (aka Turbo) whose dream to become the fastest snail in the world comes true. In other words:

An underdog snail’s dreams kick into overdrive when he miraculously attains the power of super-speed. But after making fast friends with a crew of streetwise, tricked-out es-car-goes, Turbo learns that no one succeeds on their own. So he puts his heart and shell on the line to help his pals achieve their dreams, before Turbo-charging his own impossible dream: winning the Indy 500.

In case you’ve missed our previous reports, we definitely recommend you to check out an international trailer, the latest clip and TV spot for the movie, as well as some great images and character posters. As usual – stay tuned for even more updates! 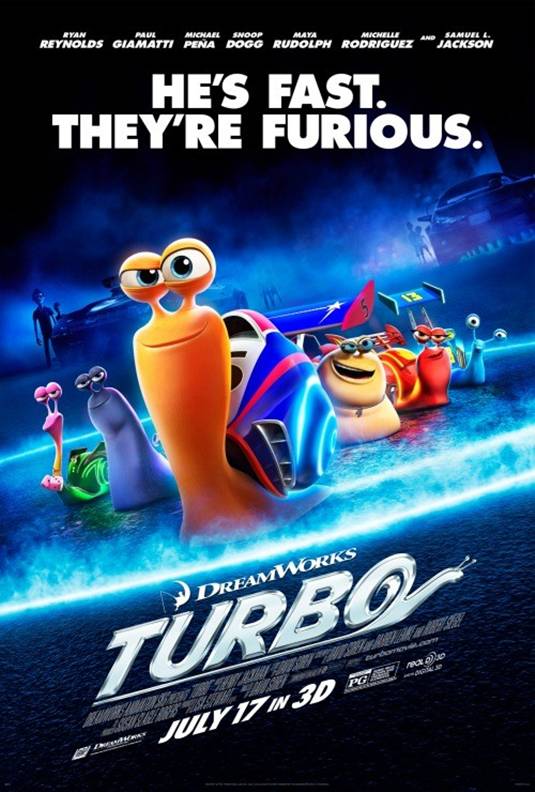