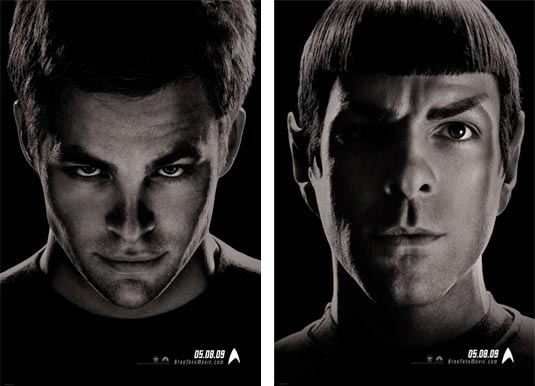 Paramount Pictures has just released two brand new character posters from the highly-anticipated “Star Trek” film, featuring Chris Pine as Kirk and Zachary Quinto as Spock. From director J.J. Abrams (“Mission: Impossible III,” “Lost” and “Alias”) and screenwriters Roberto Orci and Alex Kurtzman (“Transformers,” “MI: III”) comes a new vision of the greatest space adventure of all time, “Star Trek,” featuring a young, new crew venturing boldly where no man has gone before. Star Trek’s time-travel plot is set in motion when a Federation starship, the USS Kelvin, is attacked by a vicious Romulan (Eric Bana) desperately seeking one of the film’s heroes. From there, the film then brings Kirk and Spock center stage and tracks the origins of their friendship and how they became officers aboard the Enterprise. In fact, the movie shows how the whole original series crew came together: McCoy (Karl Urban), Uhura (Zoë Saldana), Scotty (Simon Pegg), Sulu (John Cho), and Chekov (Anton Yelchin). The adventure stretches from Earth to Vulcan, and yes, it does find a way to have Nimoy appearing in scenes with at least one of the actors on our cover – and maybe both. The storytelling is newbie-friendly, but it slyly assimilates a wide range of Trek arcana, from doomed Captain Pike (Bruce Greenwood) to Sulu’s swordsmanship to classic lines like, “I have been, and always shall be, your friend.” More ambitiously, the movie subversively plays with Trek lore – and those who know it. The opening sequence, for example, is an emotionally wrenching passage that culminates with a mythic climax sure to leave zealots howling “Heresy!” But revisionism anxiety is the point. “The movie,” Lindelof says, “is about the act of changing what you know.” Star Trek trailer coming this week! The film hits theaters on May 8, 2009.
[source: Coming Soon & LatinoReview]