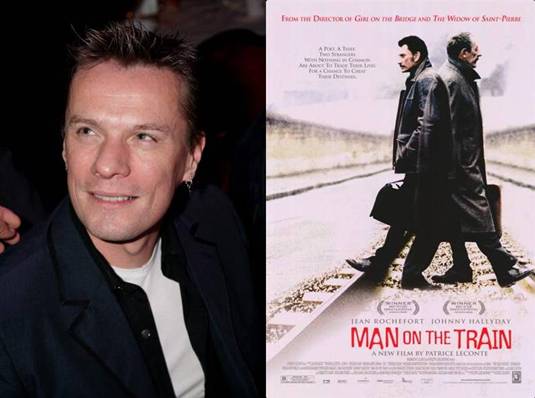 THR reveals that Larry Mullen Jr., the drummer of U2, is acting in, producing and composing a remake of Patrice Leconte‘s comic thriller or crime drama, whatsoever, Man On The Train (L’Homme du train).

In fact, film is currently in the late stages of post-production since Production Company has finished shooting in the same period last year and will be selling in Cannes next month.

Irish director/producer Mary McGuckian (The Bridge of San Luis Rey) directed the film and produced with Mullen Jr. and Martin Katz whilst Jon Goodman was an executive.

A retired teacher and an aged gangster come across in a small town pharmacy. As a special friendship develops between these diverse personalities, each starts to envy the other and by the end of the week, nothing will be the same again for both of them.

At one point in the film, Rochefort plays the piano for Hallyday and at the end of the piece asks him: “Are you musical?” Hallyday is one of France’s best-known Rock’n Rollers, so this is almost alike Uma Thurman (Mia Wallace) is asking John Travolta (as Vince Vega) “Do you dance?” in Pulp Fiction.

While this is Mullen’s first time he was ever in front of a camera, he gained some experience composing songs and scoring for film, giving a slightly different version of the Mission: Impossible theme for the film with U2 bandmate, bass player Adam Clayton.

Continue Reading
Advertisement
You may also like...
Related Topics:Donald Sutherland