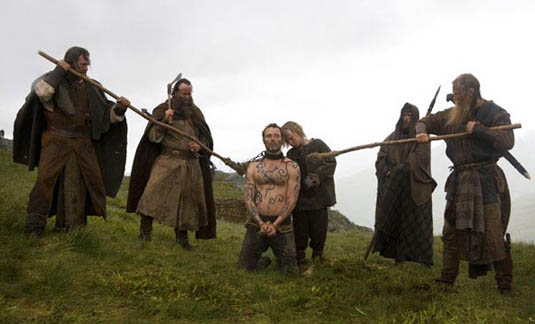 We could say that this one – Valhalla Rising – is real action adventure, although some critics say that it’s too violent, or maybe even too slow. Well, we can not totally agree with them, since we all know that you don’t have a chance to see this kind of theme in your cinemas too often.  And this time, you have some epic time mixed with visually and aurally perfection, and brought to you by director Nicolas Winding Refn. Take a look at the extended clip, below, which is actually a series of cuts from the fight scenes in the film. Check out also the first trailer with photos from Valhalla Rising. If you like Viking stories, than you will be happy to see the life of a mute warrior, who has been held prisoner by the Norse chieftain Barde. When little slave boy Are helps him to escape, they start a journey into the heart of darkness. What happens when someone is driven by hate, is that something that leads you to death, or is it the main reason to stay alive? We could say that this movie gives an answer to these questions, big answers seen from the eye of the warrior that once was nothing but a slave. And yes, you suppose that there must be some violence and brutality. But what else you expect to see from man who has no other option but survive? In the leading role of One eye warrior we have an opportunity to see Mads Mikkelsen (best known from his first two “Pusher” films also directed by Nicolas Winding Refn). Valhalla Rising had very good festival promotion all over the world, since the movie was shown at Venice, London, Toronto, Rotterdam, and Göteborg film Festivals. On the other side, we still don’t have an official date for US release, but anyway, we’re hoping to see it as soon as possible!
Continue Reading
Advertisement
You may also like...
Related Topics:Mads Mikkelsen, Nicolas Winding Refn, Valhalla Rising