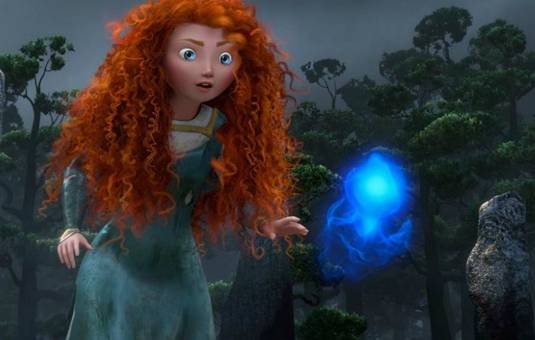 This was faster than light: Disney/Pixar has released the full new trailer for Brave! The third official full-length trailer (via Apple) for the upcoming fairy tale adventure is now online and suggests the film has strong potential. While the Triplets get their due in a recent featurette from the CG movie, the new one mostly left them behind and further explains Princess Merida’s bravery and her archery skills, along with the film’s central emotional conflict between Merida and her mother (voiced by Emma Thompson) with some of Pixar’s lush animation. As you already learned, Merida (voice of Kelly Macdonald) is a skilled archer and impetuous daughter of King Fergus (voice of Billy Connolly) and Queen Elinor (voice of Thompson). With a bow and arrow, she is the key to unlocking a ‘beastly curse’ that threatens her kingdom. But did you know the original title was The Bear King & His Daughter? Well, one of the biggest hits of the summer, Brave, opens in theaters on June 22nd. Here’s a question I want you to think about, and answer truthfully, after watching the final trailer:

If you had the chance to change your fate, would you?