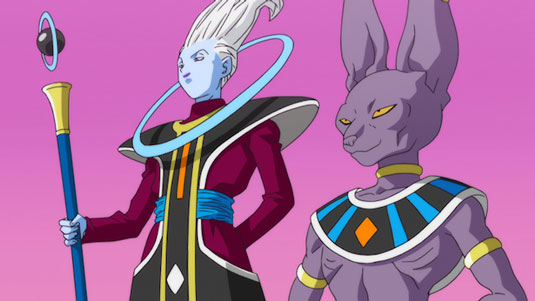 After the three-minute preview, now battle footage for the upcoming Dragon Ball Z: Battle of Gods (Dragon Ball Z: Kami to Kami) movie aired on Japanese television in HD. The scenes feature new character Birusu (Kouichi Yamadera) taking on the Z Fighters and Super Saiyan 3 Goku. Check them out: Dragon Ball Z: Battle of Gods is set between the 517th and 518th installments of Akira Toriyama‘s original manga. Specifically, it is set during the “lost decade” of story time after the end of the battle with Majin Buu. It features new characters Birusu — the God of Destruction — and his attendant Wisu (Masakazu Morita). Birusu, the god of destruction who has maintained the balance of the universe, has awakened from a 39-year slumber to destroy the planets in his realm. Hearing rumors of a Saiyan (Saiya-jin) who defeated Freeza, Birusu comes looking for Goku. Excited that a powerful oponent has appeared after so long, Goku ignores King Kai’s advice and challenges Birusu in a battle. However, Goku is no match for Birusu’s overwhelming power and is defeated. Birusu leaves after uttering an ominous message, “Is there anyone on Earth more worthy to destroy?” Will Goku and the others really be able to stop the God of Destruction?! Akira Toriyama has been deeply involved in the film’s story and designs from the early screenwriting stages. Masahiro Hosoda (Dragon Ball Z episode director, Nangoku Shounen Papuwa-kun) is directing from a script by Yūsuke Watanabe (live-action 20th Century Boys trilogy, Gantz, Bloody Monday, Future Diary). The film will open in Japan on March 30th, 2013.