“Harry Potter and the Half-Blood Prince“, the sixth entry into the series, is definitely the most leisurely of the movies to date. Clocking in at over 2 1/2 hours long, there’s no sense of urgency detected in Potterdom this time around. And why would there be? Young love is in the air. Never mind all that business with the Dark Lord and his minions, who seem to be waging an all-out assault against our heroes when they aren’t otherwise preoccupied with “snogging.”

A sampling of reviews:

Harry grows up in this one. That’s pretty much all you need to know right? Six movies into the Potter franchise, and your options for reviewing the film begin to see diminishing returns. No other successful series has gone this deep into a multi-movie story line with its main characters (and financing) intact. And there’s two more to go!

In The Half-Blood Prince Hogwarts has become as familiar as your grandparent’s beach house you get to vacation at once a year. It’s awesome and all, and you enjoy visiting, but you know its hallowed corridors like the back of your hand. Teachers, with whom you’re on a first-name basis, pass you in the halls – different landmarks and various patina of whoosie-whatsits flit around your head before you give them a second look. The magic has become second nature and commonplace to those of us who’ve already passed our OWLs…read more: [UGO]

Harry is distracted from his paper, however, by an instant flirtation with the young waitress, a saucy cutie who informs him, although he asked only with his eyes, that she gets off work at 11. She indeed waits for him on the platform, but the Chosen One must respond to his higher calling from Dumbledore (Michael Gambon), who either materializes, gets off a train, or has a pied-a-terre right there in the Underground. I for one will be disappointed if that waitress (I think her name is Elarica Gallagher) doesn’t turn up again in “Harry Potter and the Deathly Hallows,” whose two parts will conclude the series in 2010 and 2011…read more [Roger Ebert]

Director David Yates gives the film a depth beyond the first five, including THE ORDER OF THE PHOENIX, which he also directed. He has taken these young actors to a whole new level. They started with stilted deliveries, a la the three younger MYTHBUSTERS, but they show an incredible amount of maturity in this film. Particularly notable is the scene with Hermione sobbing on the steps with Harry after Ron breaks her heart. (Please tell me this is not a spoiler for you. Because this is one of those cases where you MUST read the books as well. Do it. You’ll thank me.)…read more [JoBlo]

And Harry Potter and the Half-Blood Prince, despite a few narrative threads and character arcs left dangling in the transfer, is by far one of the best of the series, and absolutely the funniest and most human. The last film that will be set largely at Hogwarts, Half-Blood Prince leaves room for its characters and the world they inhabit to breathe, returning to things like Quidditch and Christmas parties and the “frivolous” things that make Rowling’s writing such a joy. Aided by some stellar supporting players, including the tremendous Jim Broadbent as bombastic new professor Horace Slughorn, the film earns big laughs where earlier films felt more morose than magical. It’s not a light film by any means, but Half-Blood Prince feels less hellbent on plot development, and therefore a lot more fun…read more [CinemaBlend] 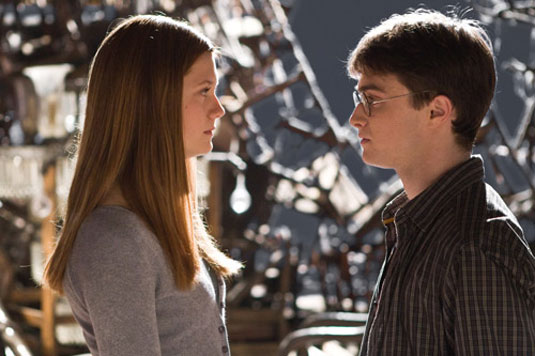 Early test screenings yielded complaints that the whole movie focused on romance and that the action was backgrounded. These complaints are, amazingly, right and wrong at the same time. Yes, the focus on the film is about the romances between the characters, but these romances don’t happen in a vacuum. Outside of Hogwarts things are getting dark, as Death Eaters have begun waging terrorist war not just on the magical world but the Muggle one as well. Things are looking downright apocalyptic, but the film knows that ill-fated romance can seem just as apocalyptic when you’re 15. In many ways this film reminded me of the better seasons of Buffy the Vampire Slayer, where the interpersonal dynamics reflect the larger, mythological stakes…read more [CHUD]

If Broadbent is the cornerstone performance, Radcliffe’s is the pinnacle. Make no mistake – this is Daniel Radcliffe’s movie. His serious dramatic work is still shaky, but the greatest addition to the character of Harry is a solid sense of humor that he seems to have gained sometime when the audience wasn’t looking. Radcliffe’s laugh lines land squarely, making it obvious that the actor has a future in comedic roles if he wants them.

That humor is important not only for character, but also important to create a sense of worth and meaning for the entire world. It’s the moments between Ron, Hermione, Harry and Ginny that give a sense of what the crew are fighting for. At the end of the last film, Harry intimates that the group’s advantage over the dark forces is that they have true friendships to defend. It’s clear that those friendships are growing, becoming deeper, and in turn becoming more important as the focus of what these characters have to lose. As the relationships become richer, they also become more fragile and raise the stakes should they be lost…read more [FilmSchoolRejects]

On the other hand, not many teens face a hero’s quest as daunting as the one set for Harry, with a showdown scheduled for Harry Potter and the Deathly Hallows. Half-Blood Prince encompasses important plot developments involving both love and death. But the story is, still and all, only a pause, deferring an intensely anticipated conclusion. And it’s in that exquisite place of action and waiting that this elegantly balanced production emerges as a model adaptation. By now, as played with utmost loyalty to the cause by some of Britain’s most illustrious actors, the supporting characters are as familiar as the population of Homer Simpson’s neighborhood (and that’s a great compliment). Yet with a big assist from cinematographer Bruno Delbonnel – a Potter newbie who memorably shot Amélie and Across the Universe – the filmmakers have found a way to refresh our eyes and enhance our appreciation for this rich, amazing creation…read more [EW] 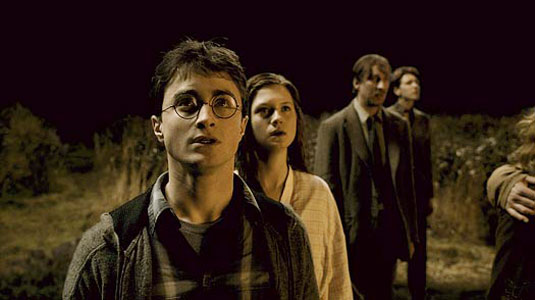 Jim Broadbent joins the cast in this film as Professor Slughorn — it’s always delightful to see yet another veteran British character actor appearing in the Harry Potter series. Broadbent’s Slughorn is a little less insinuating and power-hungry than the character in the book, and less rotund than I’d imagined the character, but I have no objection to these improvements.

Fans of the book may feel unhappy that some of their favorite parts are changed or omitted. However, as a movie dependent on earlier films in the series, Half-Blood Prince provides a carefully plotted story with plenty of humor to counterbalance the darker moments. Yates, who also directed Harry Potter and the Order of the Phoenix, has managed to find the best way to tell the Harry Potter stories effectively on film — as a tight suspense film that isn’t too scary for older kids, with a good dose of humor, Young Love, and charm. I’m not going to compare and rank this film up against the others in the series (better than #4, #3 still best) because I haven’t seen some of them in years, but this movie has me looking forward to the final two in the series, and even hoping that some of the seventh book’s flaws will vanish in the movie adaptations….read more [Cinematical]