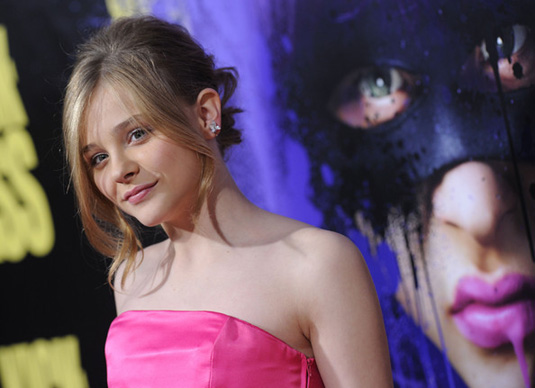 She’s only 13, but she’s, with no doubt, a very talented young girl. If you have a chance to watch Kick-Ass, than we’re sure you’ll enjoy that little Hit-Girl (Chloe Moretz), as well as her beating up bad guys twice her size and more. When you have that kind of role and you play it extremely good, than you can expect people to write about you, right? So, no wonder this young lady, Chloe Moretz, managed to get herself kind of profile review in New York Times, and we must admit that it was very interesting article, indeed… So, we already wrote about this movie, which tells the story of an average New York teenager (Aaron Johnson) who decides to don a costume and fight crime. Chloe plays Hit-Girl who, along with her father Big Daddy (Nicolas Cage) sets her sights on local mob heavy Frank D’Amico (Mark Strong). And that is some interesting team to work with when you’re still a young girl, although Chloe admits that leather costume and mask she had to wear, was less interesting part of the whole thing: “The suit was really uncomfortable…You can’t bend in leather, and so, whenever I would go down, the crotch would rip open. In some scenes if you look at the crotch, it has pieces of leather strapped in it and glued in.” 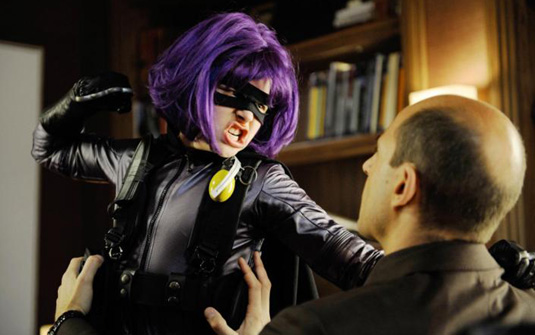 As you see, we decided to start our little report about this young actress, by giving you some interesting parts from NYT that will help you see who we’re dealing with today in Hollywood. Especially because the director Matthew Vaughn has come under fire from critics in Britain who claim the film is too violent for the big screen, and that 13-year-old Moretz should not have been cast as assassin Hit-Girl, a character who uses bad language throughout the movie. We could also mention that she was 11 when she shot the scenes, but she said us all pretty mature things: “It’s a movie. Obviously a little girl can’t beat up and kill huge, heavy men. I don’t see how anyone wouldn’t realize it’s not real. It is a controversial role, but it was a role I wanted to do. If I said a sixteenth of the words I say in that movie at home, I would be grounded for the rest of my life for sure.” Tell them Moretz girl! So what if you always wanted to do some action movie? We all had idols when we were young, right? And, it seems that Chloe is very specific about the things she wants to do: “I really want to do an Angelina Jolie-type character. You know, like an action hero, woman empowerment, awesome, take-charge leading role.” 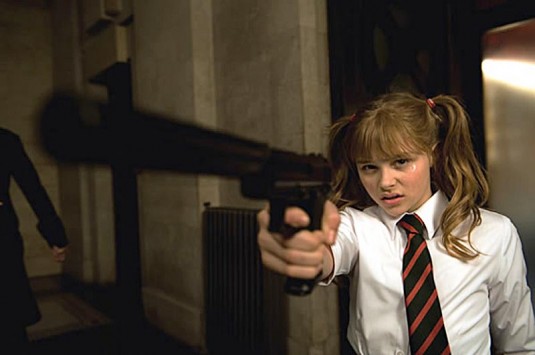 For Chloe herself, Hit-Girl was an opportunity to keep pace with her cinematic idols, to do something “no other kid had done except for Natalie Portman in Léon, she said, and added that she’s not allowed to see many of the performances that Trevor Moretz regarded as Hit-Girl’s antecedents, including Angelina Jolie in Wanted or  Jodie Foster in Taxi Driver. She was, however, given a special dispensation to watch Uma Thurman in the Kill Bill movies. “It was hilarious,” Ms. Moretz said. “It’s not like, ‘Oh, I’m killing people with real blood.’ It’s fake.” So, as you see, she’s not only a very smart girl, but she also has quite good family support, and we could just mention her mother and her 23-year-old brother Trevor, who not only read every script she’s sent (and help her make acting decisions), but Trevor is her acting coach as well. At the end of this interesting report, we decided to share with you another Chloe’s thought that assure us that we have nothing to worry, because Hollywood will have some smart and talented boys and girls in the future: “Each film I’m in sets a new brick in my acting wall. The more bricks I have, the better I am at acting.” We wish you the best Chloe, and you guys, go out and have some fun at the Kick-Ass premiere this weekend!
Continue Reading
Advertisement
You may also like...
Related Topics:Chloe Moretz, Kick-Ass