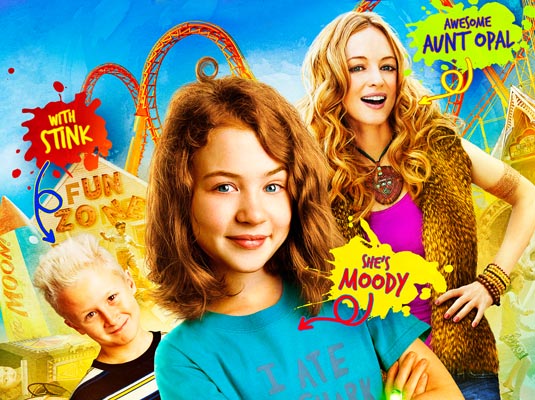 Relativity Media have provided us with new poster and trailer for the upcoming comedy Judy Moody and the NOT Bummer Summer, based on the “mega-cool” extremely popular children’s book series.

The film chronicles Judy Moody’s (Jordana Beatty) adventures in which she sets out to have the most thrilling summer of her life with the help of her little brother Stink (Parris Mosteller) and fun-loving Aunt Opal (Heather Graham). The script, penned by Kathy Waugh (Peep and the Big Wide World) and Megan McDonald, is based on the characters in McDonald’s popular children’s book series, illustrated by Peter H. Reynolds and published by Candlewick Press. There are nine adventures in the bestselling series, with more than 13 million copies in print worldwide, and translations in 22 languages. McDonald has written a novel inspired by the film’s script which will be published May 24, 2011.

When her best-laid plans for a summer full of fun go comically awry, an imaginative young girl creates her own vacation adventures in Judy Moody and the NOT Bummer Summer. Based on the beloved, bestselling book series by Megan McDonald, Judy Moody and the NOT Bummer Summer is an irresistible and delightfully funny treat for adventure-loving kids and adults.
This summer, third grader Judy Moody is planning the most super-duper, double-rare summer vacation ever with best friends Rocky and Amy. Except that it turns out Rocky is going to circus camp to learn to tame lions, and Amy is headed off to Borneo with her mom to save a lost tribe while Judy stays home with her pesky little brother Stink and second-best friend Frank Pearl.
Just when she thinks things are as rotten as they can be, her parents announce that they will be going to California and Judy will have to stay behind with her Aunt Opal, who she’s never even met! It looks like Judy’s best summer ever has just become her way worst summer ever.
But feisty, fearless and ever-funny Judy Moody never gives up! With help from some unexpected sources, she’s headed for a summer full of surprises in this charming and spirited family film. Get ready, get set, get MOODY!

Judy Moody and the NOT Bummer Summer Poster