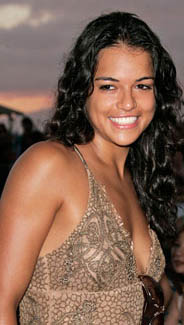 Michelle Rodriguez will be reprising her role of Letty in the fourth installment of the “The Fast and the Furious 4”. Actress’ co-star Paul Walker told about the return of Rodrigues at the premiere of “Never Back Down” in Los Angeles on March 4 when he was asked whether he will be back for the fourth film. Apart from confirming his and Rodriguez’s return, Walker also revealed that Vin Diesel and Jordana Brewster will also reprise their characters. On the occasion, he also confessed that he is persuading Tyrese Gibson to join the cast once more. Earlier, it was reported that the former Miss Israel Gal Gadot is in talks with Diesel to join the rest of the film’s cast. However, her involvement in the project has yet to be confirmed. Rodriguez was known for roles in: “Blue Crush”, “S.W.A.T.” and “Resident Evil”. She has also made a guest appearance in famous television series “Lost”. Her other latest project will be James Cameron’s “Avatar”, which will bow in theaters on December 18, 2009.
Continue Reading
Advertisement
You may also like...
Related Topics:Fast and Furious 4, Michelle Rodriguez, Paul Walker