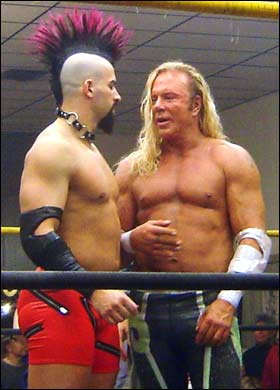 Mickey Rourke plays Randy “The Ram” Robinson who comes out of retirement to try to knock down an old rival in new flick’ The Wrestler’. Mickey is no stranger to knocking people out – he used to be a pro boxer. The Sun’s wrestling expert Simon Rothstein said: “Nicolas Cage was meant to play this role, but you can see why the producers plumped for Mickey. “His physique and blond locks remind me of Hulk Hogan.” ”I can’t wait to see him dropping an elbow or hitting a powerslam. But at 51, he probably won’t try a top rope imploding 450° splash, though.” ‘The Wrestler’ is the story of retired professional wrestler, Randy “The Ram” Robinson, making his way through the independent circuit, trying to get back in the game for one final showdown with his former rival. The film stars Mickey Rourke and Marisa Tomei and is directed by Darren Aronofsky.
Continue Reading
Advertisement
You may also like...
Related Topics:Mickey Rourke, The Wrestler