Paranormal Activity 2 is the Prequel / Update to last years blockbuster hit Paranormal Activity. In this film we get a background on what led to the events in the first film. We have the two characters from the first film Katie & Micah and also Katie’s family…her sister, brother-in-law, niece, nephew, their dog, niece’s boyfriend and of course the Demonic force with a bit more attitude this time around. This was filmed in the same first person perspective as the first one with footage from security cameras. It has a bit more shock value than the first, but I don’t think it really surpasses the first film scare wise. The people behind PARANORMAL ACTIVITY 2 clearly learned a lesson from the debacle of BLAIR WITCH 2: BOOK OF SHADOWS; they’ve hewed scrupulously close to the original film in style and tone. The result is probably the best true sequel that could have been made to PARANORMAL ACTIVITY, without avoiding the pitfalls that come with creating a close-but-not-too-close approximation of a singular success…read more [Fangoria] What is a surprise, at least to yours truly, is that Paranormal Activity 2 is actually pretty damn solid! It’s no secret that the follow-up was sort of a “rush job,” which is certainly nothing new in the horror flick business, but generally the “strike while the iron’s hot” sequels are undercooked at best, and downright miserable at worst. (Yes, I’m looking at you, Blair Witch 2.) It probably helps that the producers went to a solid (if not very prolific) director in Tod Williams (The Door in the Floor), but fair praise is due to first-time screenwriter Michael R. Perry (he’s done a lot of television) for finding a way to “copy” the first flick while also adding a few nice wrinkles to its scant-yet-creepy mythology…read more [FearNet] A year ago Paranormal Activity was the $11,000 film that could and I absolutely loved it. Made on a minuscule budget, the film went on to make over $107 million at the domestic box-office and a sequel was all but inevitable. Thirteen months later Paranormal Activity 2 is here, intent on copying the home video formula that made the first film such a success. Using props such as a German Shepherd and an infant, this film takes advantage of familiar horror film cliches for its scares rather than what felt like innovative storytelling with the original. Granted, the sequel does have its share of jump-enducing moments, but beyond that this isn’t anything more than just a copy of any number of films we’ve seen using first person camerawork to tell its story…[Rope of Silicon] 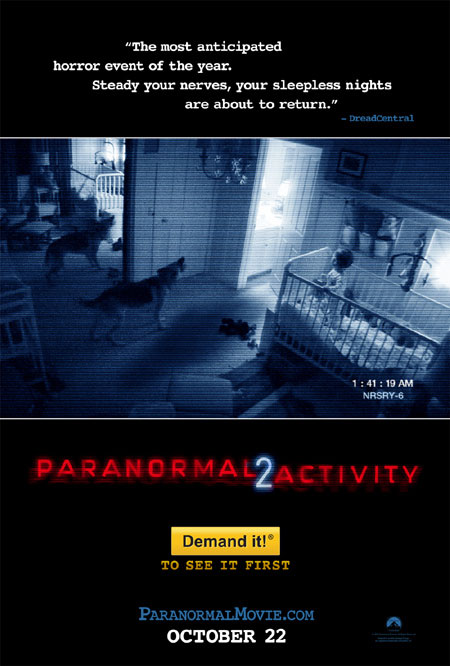 A prequel of sorts, Paranormal Activity 2 brings back Katie Featherston and Micah Sloat, and resets the timeline to two months before their dread-soaked haunting. But they’re mostly relegated to the periphery, as Featherston’s sister (Sprague Grayden) and her family—including a skeptical husband (Brian Boland), a teenage step-daughter (Molly Ephraim), and a toddler—are tormented by a demon spirit. On top of the extensive camcorder-ing that goes on in the household, a camera gimmick similar to the one in Paranormal Activity is justified by a home invasion where the place is ransacked, but nothing goes missing. Fitted with surveillance cameras in the bedrooms, living room, kitchen, and both exterior sides, the family is now ready for the escalation of terrors they’re about to face…read more [A.V. Club] Directed by Tod Williams (2004’s “The Door in the Floor”) with an emphatic grasp of how to expertly build quietly simmering suspense toward a collection of jump-out-of-your-seat payoffs, “Paranormal Activity 2” is a rousing success, at least as good as its forefather. Increasingly imperiled couple Katie and Micah (Micah Sloat), both of them making return appearances, were stronger, more indelible characters than this one’s leads, but this only minimally lesser element is evened out by an increase in spooky tension that brutally goes for the throat while staying blood-free. Time and again, major studio horror flicks fail with their overblown scare tactics and thunderous, annoyingly obvious music scores, spelling out how the viewer should feel. Efforts like “Paranormal Activity 2,” however, understand far better that silence, simple sound effects, and the anticipation that something bad is about to happen are usually far more affecting. A falling pan, a toy truck moving on its own, blowing curtains, slamming doors, and the mere sight of the grainy nighttime surveillance footage is enough to put one on edge or leave him or her outright screaming, whichever the case may be…read more [Worstpreviews]

In short, the way Paranormal Activity 2 succeeds is by giving us another dose of what worked the first time. If you enjoyed Paranormal Activity, it seems likely you’ll also enjoy the second one. (By the same token, people who weren’t scared by the first one shouldn’t bother with part two.) They’ve added a baby and a dog to the mix, but the basics are the same. Pleasant dreams!..read more [film.com] You can separate the viewers of the first Paranormal Activity into three categories: 1) People who were terrified by the experience; 2) people who were terrified by the experience but have too much pride to admit it; and 3) people who were legitimately bored by the movie. The latter category is understandable; it’s an experience you have to buy into, one that takes the proper mood and setting, and requires a certain amount of suspension of disbelief. Without it, Paranormal Activity and its sequel might come off as an exercise in tedium — a dull, restless patience-testing experience that’ll leave you scratching your head wondering wondering what anyone else found redeeming about the movie. If you fell into either of the first two categories, however, Paranormal Activity 2 will not only match the terror of the first film, it will outdo it, and in the process, do something a sequel may have never accomplished before (much less a horror-movie sequel): Make the first movie even better…read more [Pajiba]

[youtube]http://www.youtube.com/watch?v=gCt19saqOUM[/youtube] It’s back– the unconscionable “you demanded it” phenomenon that no one asked for has returned with a second helping of spook show hype, and this time around, a bigger budget means better scares. It doesn’t mean a better movie, but no one behind Paranormal Activity 2 cares about art. They’re out to make a big fat pre-Halloween profit and this combination con job and genre joke will definitely rake in the green. The gullible target audience for this 85 minutes of mediocrity clearly doesn’t want suspense, narrative, or characterization. All they want is a recognizable set up, an hour of inference, and a last act which acts like a rollercoaster of jumps and anticipatory lulls. Unfortunately, they get hackwork heart’s desire…read more [FilmCritic] “Paranormal Activity 2” is an efficient delivery system for Gotcha! Moments, of which it has about 19. Audiences who want to be Gotchaed will enjoy it. A Gotcha! Moment is a moment when something is sudden, loud and scary. This can be as basic as the old It’s Only a Cat cliché, or as abrupt as a character being hit by a bus. PA2 starts slyly with pre-Gotcha! teasers, such as a door or a child’s toy moving on its own. Then there are obscure off-screen rumbles, like a uneasy stomach. Then loud bangs. Then loud bangs with visible causes. Then all the doors in a room banging open at once. And eventually…well, you can see for yourself, because all the activity is captured by 24-hour security cameras. The cameras, which function perfectly but never capture the Presence on the screen. For the house is indeed haunted by a ghost-like supernatural presence, I guess. I say “I guess” because there is a scene of a victim being dragged downstairs, and the entity doing the dragging is invisible. On the other hand, the movie ends with a strong suggestion that the malefactor was in fact a living human being. So would that be cheating? Hell yes…read more [Roger Ebert] As for the direction, well- let’s just say there is none. Director Tod Williams actually made a great indie back in the nineties called THE ADVENTURES OF SEBASTIAN COLE, but here he’s just aping Oren Peli’s work in the first film. No effort whatsoever is made to distinguish the two films. The way the two families are tied together through a character from the first film suggests this is meant to be taken as just an extension of that film (actually a prequel), which is kinda boring if you ask me- but I suppose is what the PARANORMAL ACTIVITY fans want. I suppose this is meant to build some kind of mythology, so that this cash cow can keep giving the studio buckets of milk. Sure enough, the audience I saw this with seemed to go for it in a big way, with lots of jumps and audible “holy shits” coming out of the sneak preview crowd. For me, this is a bit of a sad commentary on what we find scary, as- just like the first one, this is full of cheap scares, with rumbling sound fx, and jump scenes being the only tools at the disposal of the filmmakers…read more [Joblo]