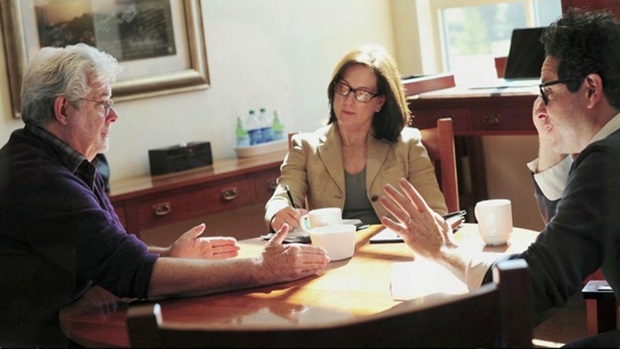 One THR insider claims producer Kathleen Kennedy (Jurassic Park) and ‘most of the film’s creative team’ want to push back the release of Star Wars: Episode VII to 2016, but Disney CEO Robert Iger is uncompromising in his desire to get the film out in 2015. A week ago, it was announced that director J.J. Abrams (Super 8) was teaming up with Lawrence Kasdan (Empire Strikes Back) on the script that was being worked on by Michael Arndt (Toy Story 3), but according to sources he was 40-50 pages into the script when the change happened. Bearing this in mind, Abrams have to focus his time on that aspect more than he previously would have. Moreover, other rumors state that the duo are at odds with casting as Abrams has taken a greater amount of control of Episode VII in recent months, while others say they are working together and ‘unlike Kennedy, Abrams is said to be more in sync with Iger’s desire to meet the 2015 release target — which allows zero margin for error — at all costs.’ All this is simply to say that upcoming Episode VII is exposed to too much pressure to meet extremely high expectations so the added pressure from Disney to get the film out in 2015 hopefully doesn’t result in a half-baked finished product. On the other hand, it might not be in Star Wars best interest to be competing against expected box office hits such as Avengers: Age of Ultron, or Batman Vs. Superman. But, Disney wants to keep their new mega-franchise on track no matter what, with the eighth and ninth installments scheduled for a 2017 and 2019 release, and with other, ‘origin story films’ in between the trilogy installments. Do you think Star Wars: Episode VII could sacrifice quality for maintaining the set release date?