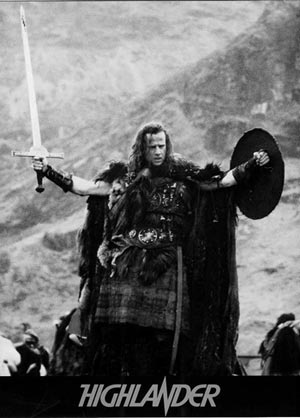 Summit Entertainment are set to restart the “Highlander” franchise with a brand new movie. Variety reports that the company will produce the film after hiring “Iron Man” screenwriters Art Marcum and Matt Holloway to pen the script. The plan is to expand on the original pic’s premise of immortals battling each other for a mysterious prize.Apparently the new film will mix contemporary settings, action, mythology and medieval Scotland. Peter Davis, who produced the original movie will return to produce the new one. Davis said the new “Highlander” will not just be a remake but will incorporate more backstory elements and prequel aspects that will be fleshed out to expand the story line in a way that is inventive yet faithful to the original story. He also said romance was key to the series’ popularity and would be a central theme in the new film. “I would hate to think that people viewed ‘Highlander’ as a sword fighting movie because it’s much more than that,” he said. “The issues of an immortal falling in love with a woman and knowing she’s going to grow old and die in your arms, those are very romantic issues to deal with.”
Continue Reading
Advertisement
You may also like...
Related Topics:Highlander