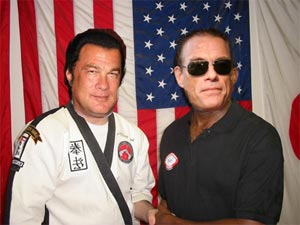 Director Mark Nippe (“Spawn”) has signed to direct the curiously-titled “Van Damme vs. Seagal”. Alas – I’m guessing, but I think it’s pretty safe to say I’d be correct with my supposition – it won’t feature the real ‘Muscles for Brussels’ or the true Ponytailed Cook, but the film still sounds like it’ll be worth a look (cast and joke dependent, naturally). Nippe has a background in special effects – having worked on such pics as “Back to the Future II” and “The Flintstones” – but made his directorial debut with 1994’s “Spawn”. Since then he’s directed “Pixel Perfect”, “Halloweentown High”, “Frankenfish” and the recent DTV release, “Garfield Gets Real”. “Van Damme vs. Seagal” is a spoof comedy making fun of action heroes Van Damme and Seagal, both living in the Hollywood hills jealously trying to make each others’ life miserable – until a real nuclear threat arises and forces them to combine their action hero powers.
Continue Reading
Advertisement
You may also like...
Related Topics:Steven Seagal