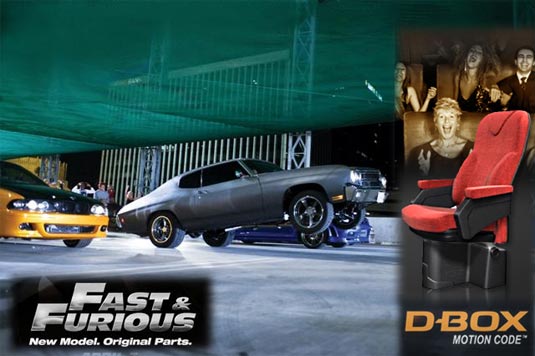 Heading to the movies just became a more “moving” experience, thanks to new motion-activated theater seats available for theatergoers, D-BOX Technologies announced today. Beginning April 3, audiences will experience the seats with the release of Universal Pictures’ new action-thriller, Fast & Furious. D-BOX Technologies will debut its Motion Systems for the first time during this theatrical release. The seats are equipped with the company’s Motion technology and powered by D-BOX Motion Effects that corresponds to the action taking place onscreen, causing the seats to tilt and shake in perfect synchronization with the onscreen action. Audience members will feel all the shifts and rumbles of an opening hijacking sequence, however the seats will remain still during the quieter, dialogue-driven scenes. The seats are in motion for about a third of the film, including intelligent vibrations that move along to the soundtrack and stronger movements for the action scenes. “We are thrilled to finally offer our Motion Systems for the public to experience,” stated President and CEO of D-BOX Technologies, Claude McMaster. “Not since the creation of surround sound and 3D has there been a movie theater innovation like our Motion Code(TM) technology. The movements that these seats make are very sophisticated; the audience will not be jostled around the entire movie, rather they will feel much more a part of the action taking place onscreen. Our goal is to provide moviegoers with an unmatched realistic immersive experience.” D-BOX’s Motion Systems will debut April 3 at the Mann Chinese 6 Theatre in Hollywood and UltraStar Surprise Pointe 14 in Arizona – the first two movie theaters in the world to feature the innovative technology, incorporating motion as the next dimension in moviegoing. For additional information about each theater location or to purchase D-BOX tickets, visit www.manntheatres.com for Mann’s Chinese 6 in Hollywood or www.ultrastarmovies.com for UltraStar Cinemas in Arizona.
Continue Reading
Advertisement
You may also like...
Related Topics:Fast and Furious 4