Connect with us
Academy Award winner Diane Keaton (Something’s Gotta Give), Oscar nominee Queen Latifah (Chicago) and Katie Holmes (Thank You for Smoking) star in Mad Money, a comedy about three ordinary women who form an unlikely friendship and decide to do something extraordinary-rob one of the most secure banks in the world. Mad Money is directed by Academy Award winner Callie Khouri (screenwriter of Thelma and Louise, director of Divine Secrets of the Ya-Ya Sisterhood), from a script by Glen Gers (Fracture). 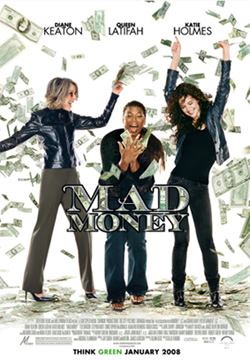 Bridget Cardigan (Diane Keaton) is shocked to learn that she is on the verge of losing her home and comfortable upper middle class lifestyle when her husband Don (Ted Danson) is downsized from his job. Armed only with a decades old English degree and years as a dedicated mother and corporate wife, Bridget is forced into the unfamiliar labor market with no job skills. Finally, she accepts the only position she can findjanitor at the Federal Reserve Bank. The one-time suburban mom soon discovers she has more in common with her new co-workers than she thought. Bridget forges an unexpected bond with Nina (Queen Latifah), a hard-working single mom with two kids to raise, and Jackie (Katie Holmes), an exuberant free spirit with nothing to lose. Caught up in a system that underestimates their talents and keeps their dreams just out of reach, Bridget, Nina and Jackie set out to even the score. After a lifetime of playing by the rules, the three devise a plan to smuggle soon-to-be destroyed currency out of the supposedly airtight Reserve. As the unlikely crime syndicate amasses piles of cash, it looks like they have pulled off the perfect crimeuntil a minor misstep alerts the authorities. With more money than they know what to do with, the women are pushed to the limits of their ingenuity to stay one step ahead of the law! ‘Mad Money’ trailer
Continue Reading
Advertisement
You may also like...
Related Topics:Diane Keaton, Katie Holmes, Queen Latifah